Meet Dabo Swinney®, The Clemson Coach Who Trademarked More Than His Name

Dabo Swinney of the Clemson Tigers during a game in Miami Gardens, FL on Oct. 24, 2015.
Mike Ehrmann—Getty Images
By Sean Gregory

Three months before leading his team to Monday’s college football national championship game, Clemson coach Dabo Swinney was standing in the rain, in front of a national television audience, happy as all hell. And who could blame him? On this October Saturday night, the Tigers had just won a 24-22 thriller over Notre Dame to remain undefeated and boost their national title hopes. “What I told them tonight,” a drenched Swinney said during his post-game interview, his voice rising as euphoric fans bounced in the background, “was, ‘listen, we give you scholarships, we give you stipends and meals and a place to live. We give you nice uniforms. I can’t give you guts! And I can’t give you heart! And tonight, it was BYOG. Bring Your Own Guts!”

The crowd cheered. The clip went viral. Clemson had its new rallying cry. And its coach coined his latest potential cash cow.

On Jan. 11., Clemson will face Alabama in the college football championship game in Glendale, Arizona. Besides providing compelling on-field theater, this title bout serves as an annual reminder of the sport’s inherent inequities. That night, you could consider University of Phoenix stadium, the site of the game, a monument to American capitalism, with the millions of dollars of ticket revenue, concessions, sponsorship dollars, media rights, and performance bonuses practically sloshing around the seats. Meanwhile, the people driving this economic engine — the players — are cut off from this free market.

While NCAA rules allow college athletes to trademark their names or slogans, they are prevented from collecting royalties until their playing days are over–precisely when those marks are likely to lose value. Swinney, meanwhile, trademarked his own name in 2009, after Clemson named him head coach and is also a vocal opponent of paying college athletes. “As far as playing players, professionalizing college athletics, that’s where you lose me,” Swinney has said. “I’ll go do something else. Because there’s enough entitlement in this world as it is.” (These comments earned Swinney special scorn from HBO host John Oliver during his takedown of the NCAA last March.)

As part of Swinney’s $3.3 million compensation package in 2015, Clemson paid him $500,000 for the rights to market his name, image, and likeness. Thanks to the trademarks, other parties that sell Swinney trade-marked products must pay 10% of wholesale price to Swinney for using his name (Dabo Swinney or just Dabo), and 10% to Swinney for using BYOG or Bring Your Own Guts. So Swinney makes 20% on items that include both. The Collegiate Licensing Company, which helps manage the relationships between’s Swinney’s representatives and outside vendors, has given permission to 13 companies, including Nike, to sell merchandise — mostly apparel — stamped with the BYOG slogan or Swinney’s name or both.

When asked for data on the BYOG/Dabo Swinney items, a Collegiate Licensing rep wrote in an email that Clemson, a public university, requested that “we not share any data for the program regarding sales or royalties.” Clemson’s sports information office did not respond to TIME’s request for comment from Swinney or a member of the athletic department administration.

This isn’t greed, say trademark attorneys. It’s just common sense. If Swinney doesn’t file, someone else will. “It’s a question of fairness,” says Kenneth Liu, an intellectual property lawyer with Gammon & Grange, a Virginia-based firm “Who’s the one who should make money off of a phenomenon. Some entrepreneur. Or the person who came up with the idea?” And you can’t blame Swinney for the NCAA’s unfair amateurism rules. “I don’t think college coaches should be treated differently than other public figure just because others can’t profit in the same way,” says attorney Carrie A. Johnson, who worked on Swinney’s name trademark.

Soon after Swinney got the head coaching job at Clemson in 2008, his agent, Mike Brown, pushed to trademark his name. “We knew it was so unique, that when he had success, people would want to leverage and use it,” Brown says. (Swinney’s given name is William, but his older brother Tripp called him “that boy” when they were toddlers in Alabama. It sounded like “Dabo” and has stuck ever since.) As Brown began the process, he discovered that a food manufacturer filed to trademark Dabo’s pork rinds in 2006. Swinney told Brown that while he was an assistant coach, he struck up a conversation with a food manufacturer on an airplane, who asked him about the origins of his name. Brown thinks the pork rinds could have been named after Swinney, but a representative for Rudolph Foods, owner of Dabo’s, insists the product was named after a plant manager in Mississippi who shares Swinney’s unusual moniker. “I know our trademarks are good,” says Mark Singleton, vice president of sales and marketing at Rudolph Foods. “And coach Swinney can expect to receive a whole bunch of pork rinds.”

Read More: Here’s Who Wins March Madness in the Classroom

Before this season, and Swinney’s BYOG moment, Brown says his client hadn’t earned any meaningful royalties from his trademarks. And the BYOG/Bring Your Own Guts trademark applications also sought to cover “charitable fundraising services.” Some or all of the new revenue could go to charity, Brown says, although he says the two have not yet discussed how it will be distributed.

Swinney’s far from the only sports figure to trademark a name or slogan. Pat Riley has dibs on “Three-peat” — even though none of his teams ever won three straight titles. Jeremy Lin filed papers for Linsanity. After leading his team to a comeback victory in late October, Washington Redskins quarterback Kirk Cousins shouted “You like that!” to the cameras on his way to the locker room. The exclamation went viral, and he filed for the trademark two days later. Swinney’s national championship opponent, Alabama coach Nick Saban, doesn’t show up in the trademark records. But Ohio State, another powerhouse football program, has secured one for Urban Meyer and Urban Meyer Knows.

At some point, college athletes will be able to shout something catchy on Saturday, and reap the the rewards the next week. Through court cases and public pressure, players are slowly making gains. Schools can now provide full cost-of-attendance benefits. But the progress is halting. In September, a federal appeals court overturned a judge’s plan that schools give football and men’s basketball players some $5,000 a year for name, imagine and likeness rights. However, the court also affirmed that NCAA amateurism violated federal anti-trust law. Another class action case, put forward by influential sports labor attorney Jeffrey Kessler, could create a true open market for player compensation.

For now, however, only the coach’s royalties soars if Clemson wins the title. The Dabo shirts and hats will fly off the shelves. In his Bring Your Own Guts speech after the Notre Dame game, Swinney touts all the good things schools give athletes, outside of pay: scholarships, stipends, meals, dorms, uniforms. But this one thing Clemson can’t deliver, this one thing the players had to bring on their own — guts — Swinney went ahead and trademarked for himself. 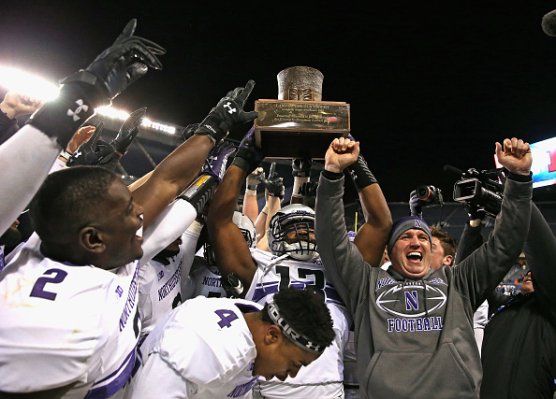 College Football Top 25, Ranked by Academics
Next Up: Editor's Pick