How Trump is Attacking Cruz

Feeling the heat in Iowa, Donald Trump is renewing his “birther” criticism of Ted Cruz, who was born in Canada to American parents. Cruz shrugged off the criticism Tuesday as aides said the attack was a sign their candidate was solidifying his lead in Iowa. Trump, meanwhile, continues to use the media as a punching bag at his rallies, calling out individual members of the press to rile up his supporters.

The GOP ad war continues to heat up as Chris Christie is firing back against an assault by Marco Rubio with a new ad Wednesday that both calls out Rubio for attacking Christie and seeks to position Christie on the high road by noting his focus on attacking Hillary Clinton.

North Korea’s claim that it carried out a hydrogen bomb test is already causing Republican presidential candidates to issue statements critical of President Obama‘s foreign policy. The U.S. has yet to confirm the test, but Rubio called it the “latest example of the failed Obama-Clinton foreign policy,” adding, “Our enemies around the world are taking advantage of Obama’s weakness. We need new leadership that will stand up.”

Jeb Bush gets emotional about drug addiction. Rand Paul tells off seniors on raising the retirement age. And the South Carolina governor will deliver the State of the Union response.

Trump Says Cruz’s Canadian Birth Could Be ‘Very Precarious’ for GOP
Under pressure in Iowa, Trump finds another angle of attack [Washington Post]

“Look, you’ve got to have real security with the voting system. This voting system is out of control. You have people, in my opinion, that are voting many, many times. They don’t want security, they don’t want cards.” — Donald Trump in New Hampshire Tuesday suggesting there is a widespread voter fraud in the U.S., despite the fact that researchers have found little evidence of it

“I’m not gleefully jumping up and down about raising the age. It’s not very popular” — Rand Paul in New Hampshire Tuesday explaining why he’s supporting raising the retirement age for Social Security

Inside the Decision to Open Up the Frontlines to Women [TIME]

Gov. Nikki Haley to Deliver GOP Response to Obama’s State of the Union [The State] 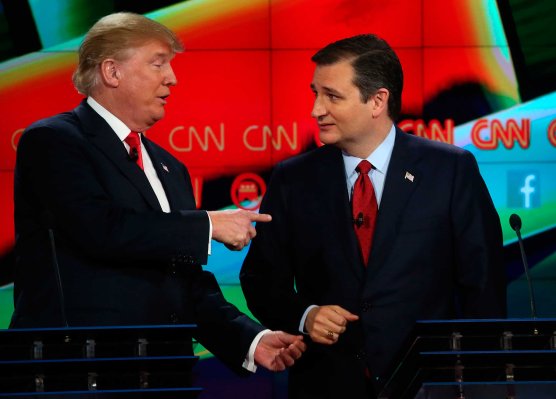 Trump Concerned About Canadian-Born Cruz
Next Up: Editor's Pick