A former Marine’s final Facebook post that went viral after he was killed by an alleged drunk driver on New Year’s Eve has brought peace to his loved ones and inspiration to thousands across the country, family and friends said.

Hours before, the decorated former Marine corporal wrote on Facebook about how “anything can happen in one day.” He also brought up challenges he had overcome in 2015 and outlined plans to be a better man in the next year.

“I really don’t know where I’ll end up tonight but I do know where I windup [sic] is where I’m meant to be,” DeRemer wrote. His words were seen by more than 41,000 people, and have relieved some pain for grieving family members, his mother told TIME.

“It helps us heal,” his mother Julie DeRemer, 53, said Tuesday. “He believed all those words. These are the pieces of him that he’s left behind. He touched everyone. He was an inspiration.”

DeRemer, who was raised in Indiana before moving to St. Petersburg in Florida, struggled with “demons” during his six years in the service and many years after, his friend Line Lorenzen said.

“When he was in Iraq, it was one of the hardest things to deal with. Those demons followed him,” Lorenzen, 28, told TIME. “We talked about everything he had to go through. There are a lot of things to deal with when you’re a Marine. There’s a lot of death around you, and those things never go away.”

DeRemer was a motor vehicle operator during his time in the Marine Corps from 2006 to 2010, Marine spokeswoman Yvonne Carlock said. He won seven awards, including medals for Global War on Terrorism Service, Combat Action and National Defense Service.

“He’s seen some pretty dark things,” his mom said. “There were moments that were dark for him. You have to work through all of that. It changes your perspective on life, totally.”

Her son, a dedicated Christian, was recently hired as a surgical technician and was a beloved member of a local Christian motorcycle group. He pledged to be a “happy, postivie person every day,” according to friends. Before he died, DeRemer also wrote: “My goal this year, while battling all obstacles, is to redefine my life by living as selfless as possible.”

“That’s how he pulled through,” his mother said.

Steven Clarke, 59, who police say struck DeRemer, was arrested and charged with DUI manslaughter and failure to yield right-of-way, authorities said. The Seminole man was not injured, according to the Florida Highway Patrol.

DeRemer’s friends say they visit the site of the crash every day for hours at a time. “That helps me to be with me,” Lorenzen said. “I just don’t want to leave. I just want to be with my best friend.”

Lorenzen has also created a GoFundMe page, which has raised more than $1,000 to help his parents pay for funeral costs. “It’s still very surreal,” she added. “It’s been very, very painful. He was like my big brother. He was so excited to start a new year off the right way. It’s just unfair.” 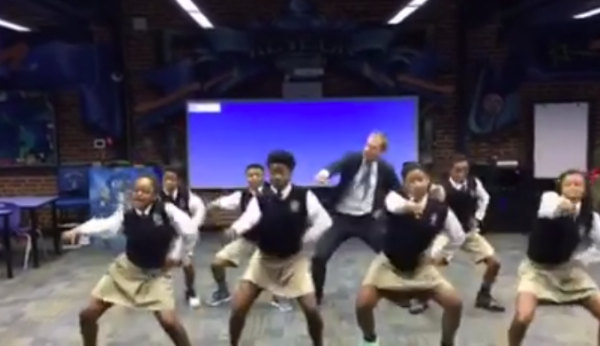 Watch an Atlanta Teacher Perform a Serious Dance With His Students
Next Up: Editor's Pick