Protesters hold up images of missing publishers of books critical of China, including the latest to vanish, Lee Bo, as they walk toward China's Liaison Office in Hong Kong on Jan, 3, 2016
Anthony Wallace—AFP/Getty Images
By TIME Staff

The wife of a missing publisher of books critical of China’s ruling Communist Party has withdrawn the report of his disappearance that she filed with Hong Kong police.

According to the South China Morning Post, the wife of 65-year-old Lee Bo went to a police station in the eastern part of Hong Kong Island Monday and told officers that there was no need to investigate his whereabouts.

Her decision has only fueled rumors, however, that Lee has been abducted by mainland Chinese agents. The case has prompted deep alarm in a city that is supposed to enjoy legal autonomy from China since former colonial power Britain returned it to Chinese sovereignty in 1997.

The Guardian has reported that Lee may be a British citizen.

Lee’s wife told the Post that he contacted her last week saying that he was in the Chinese border city of Shenzhen, even though he left at home a vital permit that all Hong Kongers must produce in order to cross into China. There is no official record of Lee leaving Hong Kong.

He is the fifth person connected to Hong Kong’s Sage bookstore — which specialized in popular but lurid and reportedly defamatory works on Chinese Communist Party officials — to have vanished since the owner of the shop’s parent company failed to return from a holiday in Thailand last October. The company’s general manager and two other staff are also missing.

Taiwan’s official Central News Agency has reported that Lee faxed a message to a colleague saying that he had made “his own way” to China to take part in an unspecified investigation and that his situation was “very good,” but noting that he would be “some time.”

Hong Kong’s top official, Chief Executive Leung Chun-ying, has said that he is “extremely concerned” about Lee and that his administration “cares very much” about the “rights and safety” of the people of Hong Kong. Leung stressed that mainland officers do not have law-enforcement powers in Hong Kong.

Lee’s disappearance has sent shockwaves not only through the city’s dissident circles, who have long enjoyed the ability to vigorously protest on rights issues in China, but through a broader community that trusted in the sanctity of Hong Kong’s long-established legal jurisdiction.

According to the Post, Hong Kong police have said they will continue to investigate Lee’s whereabouts, despite the fact that his wife has withdrawn her report of his disappearance. 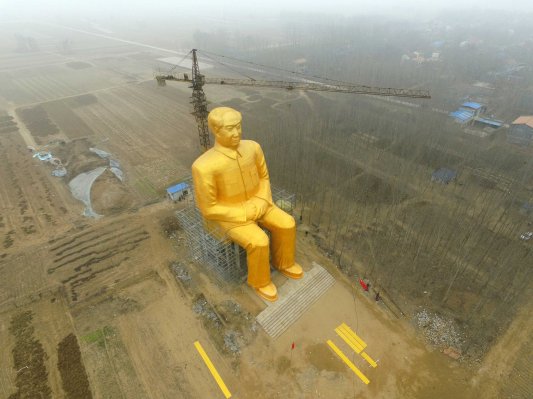 See the Massive Statue of Mao Zedong Under Construction in China
Next Up: Editor's Pick