Most people think of the Obama White House as a boy’s club. But towards the end of his first term, and into his second, the women of the White House were quietly exerting more and more influence.

Thirty-nine percent of Obama’s West Wing staff was female, a 10-percentage point increase over the end of the Bush Administration—ultimately proving to be a critical mass where women’s voices were heard and their presence felt.

Perhaps the most illustrative and impactful female duo in Obama’s White House were deputy chiefs of staff Nancy-Ann DeParle and Alyssa Mastromonaco. Over lunch late in the summer of 2014, I interviewed them together over salads and coffee sitting in the window table at the Peacock Café in Georgetown. Both are petite brunettes. Mastromonaco, now chief operating officer at Vice, is quick to a smile and a quip. DeParle, who now is a partner and co-founder of Consonance Capital, a private equity firm, is more reserved, though her affection for Mastromonaco is obvious. Neither knew the other well when they were approached by the president to become deputy chiefs of staff in 2011—the first time there have been two female deputies.

The job is daunting: the two deputies basically divvy up the entire world and run interference for the White House chief of staff, and therefore, the President. Mastromonaco was deputy chief of operations, in charge of scheduling, advance work, the Administration and its various and enormous departments, and the budget, crunching the numbers on major policy initiatives; and DeParle became deputy chief for policy, in charge of shepherding the President’s foreign and domestic policies and seeing his agenda through Congress.

In the past, there have been turf wars and tension between deputy chiefs, with their overlapping and enormous fiefdoms. Mastromonaco and DeParle quickly decided that they would share power and support, rather than try to undermine, one another. “So we marched upstairs together and we’re like: we’re in!” Mastromonaco laughed. Instead of jockeying for prominence, they took on the responsibilities as a team.

Mastromonaco noted that she never concerned herself about health care reform, as long as she knew DeParle was in the room. Why spend time recreating work that she knew was being handled by DeParle? “We were the least competitive people ever. We just divvied things up and did our own thing,” Mastromonaco said.

“We never worked together,” DeParle echoed. “She was doing her thing and I would do mine.”

The two also tried to have some fun along the way. They started a private joke that they were the administration’s Smurfettes, the lone female character on the animated Smurfs show, created by mistake, in a village of male Smurfs. Both had blue Smurfettes prominently positioned on their desks. “I kept waiting for one of the guys to say something and no one ever asked,” DeParle said.

And instead of keeping their male predecessors’ Secret Service names, they chose Popsicle for Mastromonaco and Peaches for DeParle—and delighted in watching the mostly male, macho Secret Service agents announce the arrival of Popsicle or Peaches.

But for all their playfulness, the pair—indeed, like most women at the edge of critical mass— were much more focused on the nitty-gritty of their work than on the politics of the West Wing.

On any given day, something is bound to be spinning out of control in the world: Yazidis stuck on an Iraqi mountaintop surrounded by ISIS, school girls kidnapped by Boko Haram in Africa, an oil spill in the Gulf of Mexico and an avian flu outbreak in Mexico. And in the West Wing, those overseeing the crisis have the President’s ear until it’s resolved.

Read More: GOP Congresswomen Have Some Advice for Their Party’s 2016 Candidates

But there are other incredibly important though not terribly prominent issues to attend to, and the staff has to handle those alongside the crises. The temptation for most men had been to drop everything and jump into the crisis. But if every one does that, no one is left to do the other work that needs to get done. For example, during the Ebola crisis, as the White House weighed calls to suspend all direct flights from Africa or to quarantine Dallas when a deadly case popped up there, DeParle was charged with figuring out how to appease environmental groups seeking to preserve the lesser prairie chicken as an endangered species without restricting development of large swathes of Texas.

“Everyone would want to be doing Ebola and she’d have to come and have a meeting on these prairie chickens,” Mastromonaco said. “It’d be so great if we could say: Oh, I’m so interested in [Ebola] right now, I’m just going to take it up, like a hobby. But we never do. Ever. We just did what we could that would make the West Wing productive.”

Perhaps the best example of the eagerness to show proximity to power is the night Osama bin Laden was killed, one of the most important moments of Obama’s Administration. Neither DeParle now Mastromonaco were in the Situation Room the night of the raid, but most male White House staffers bluster and brag that they either were there or knew about it—when in reality, few did.

“I shouldn’t have [been there] because that’s not my job,” Mastromonaco said. “And that’s part of the problem is if people aren’t swimming in their lanes.” If everyone in the building drops everything to work on a crisis, the work that’s critical to running the nation would simply stop. The women were more aware of sticking to their duties and coming in on a crisis only when absolutely needed. In other words, they didn’t insert themselves into other people’s business.

Mastromonaco and DeParle’s duties included serving as traveling chief of staff with the President. They would switch off, coordinating schedules around DeParle’s nightly tuck-in duties for her two young kids. They both preferred riding in the staff van rather than in the President’s limo so that they could get work done.

DeParle and Mastromonaco used to marvel at the some of men who traveled with the President, secretly calling them “moths to a flame.” These men lopped down the steps of Air Force One and got into the waiting limo, assuming they’d be riding with the President.

If you sat with the President, you had to talk to him—and Mastromonaco and DeParle both worried that he’d be distracted by whatever relatively mundane task they were tackling.

“We often didn’t want him to know because it kept him focused,” DeParle said. “He used to get mad and finally he said to me, ’Is there something about me that you don’t like sitting with me?’” Deparle said. “And I said, ‘No, Mr. President, it’s not that. I just felt that you deserved some time to be by yourself.’”

Where one sits in a meeting is important too—and Mastromonaco and DeParle led by example, only sitting at the table when they were key to a meeting. “To me, a staffer at the National Economic Council who is doing housing should be at the table if the meeting’s on housing,” said Mastromonaco. “And then the men would always sit at the table. Relevant, not relevant. … It could actually be a meeting about how birth control makes you feel, and they would sit at the table.”

As deputy chiefs of staff, DeParle and Mastromonaco encouraged only relevant staff to sit at the table; as a result, junior staffers didn’t have to shout from the back, and more senior men were left standing. For the first time, the women of the West Wing had enough numbers and clout to elbow their way in and run things as well as the men—and more efficiently.

This is an excerpt from TIME Magazine correspondent Jay Newton-Small’s new book “Broad Influence: How Women Are Changing the Way America Works,” out January 5 and available here on Amazon. The book looks at the areas in the workforce where women are reaching critical mass—typically between 20-30 percent—and how they’re changing the way we govern, manage, adjudicate and command. 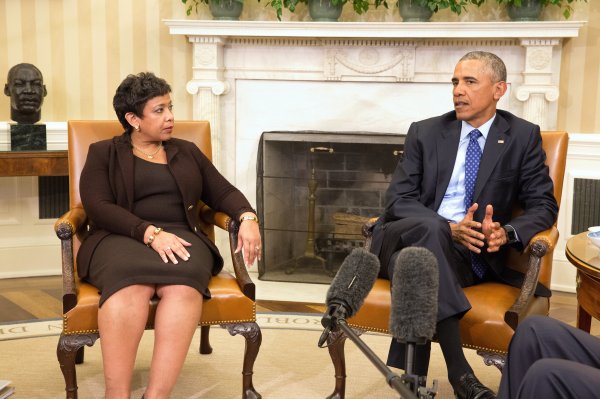 Obama Cracks Down on Gun Loopholes
Next Up: Editor's Pick