How the Nixon Administration Got the CIA to Distort Intelligence

One of Richard Nixon’s three main foreign policy goals when he became president in January 1969 was to reach a deal with the Soviet Union to slow the runaway race to build more and more nuclear weapons.

To do that, however, he had to persuade Congress to approve a massive anti-ballistic missile (ABM) system that Nixon could then trade away at the negotiating table with the Soviets. Persuading Congress meant scaring enough members that the Soviets possessed the capability to wipe out U.S. missiles with a devastating first strike.

The main way to do that was to show that the Soviets had been testing multiple independent reentry vehicles (MIRVs) on its largest missile, the SS-9. That would effectively turn the SS-9 into a dangerous nuclear hydra capable of launching warheads into space that would then land separately, as if they were three individual missiles.

Nixon and his national security adviser, Henry Kissinger, were hampered by a lack of evidence that proved the Soviets were indeed testing MIRVs. They knew they had to force the CIA to say something it had resisted saying for months.

The CIA, led by Director Richard Helms, said its intelligence showed that the Soviets had not tested SS-9s with MIRVs. If the Soviets had conducted such tests, it would have meant they had the capability to launch a devastating first strike on U.S. missile sites and potentially wipe out the U.S. Minuteman silos and prevent a U.S. response.

Nixon and Kissinger were not deterred by Helms’s assertions. They wanted to persuade Congress to approve a new ABM system called Safeguard, but they needed the specter of the hulking SS-9s armed with multiple warheads to push Congress over the brink.

Except it wasn’t true. Helms knew it. He spent most of 1969 trying to persuade Nixon and Kissinger that the Soviets had not tested MIRVs before the White House finally pushed Helms to water down his agency’s intelligence estimates.

Now, newly released documents from the National Archives show that Helms did not forget he was right. A November 1970 from Helms to Kissinger hammers home the point that the agency had been correct in reporting that the Soviets had not tested MIRVs on its biggest missies.

“In mid 1968 the Soviets began testing a multiple re-entry vehicle version of their largest ICBM, the SS-9,” Helms wrote Kissinger. “We have referred to that system as the SS-9 Mod 4. The program consisted of flight tests over their normal test range without the Soviet Union and to longer ranges in the Pacific Ocean.

“As of April 1970, there had been seventeen tests of the system – a number which usually represents a complete Soviet R&D program,” Helms wrote.

Helms’s memo summed up what he had repeatedly told Kissinger and others: The Soviet Union did not have specialized warheads atop their largest missile.

The rest of Helms’s memo to Kissinger was redacted by the intelligence community, which cited the potential revelation of intelligence sources and methods in keeping the information classified. Helms, however, provided the relevant pages from two National Intelligence Estimates of Soviet nuclear capability that highlighted the dispute between the agency, the Nixon White House and the Pentagon.

The Helms memo was part of a large batch of Nixon administration documents released Nov. 30 by the National Archives and the Nixon Library. They also included a June 1969 Nixon memo in which he complained that key staff members were ignoring his orders.

Nixon had to fight to get Congress to approve the ABM system, and he resorted to claiming that the Soviets could destroy U.S. ICBMs in an overwhelming first strike. An almost evenly divided Senate approved Safeguard in August 1969, and Nixon traded it away at the negotiating table with the Soviets in 1972.

Kissinger knew the CIA was right, and the others were wrong. There was no proof that the Soviets were testing MIRVs for their giant missiles. Nevertheless, Helms gave in to the White House.

As I wrote in my new book, Nixon’s Gamble, “Helms tried to downplay the change by saying he served the president and had to accede to his wishes. If so, Helms could have made that decision months earlier and saved himself the aggravation. In the end, Helms’s delay hurt his relationship with Nixon and damaged his reputation with his CIA subordinates. They realized the pressure Nixon had placed on him, but they also saw the risks of independent analysis for a president who did not value it.”

By the time Helms wrote his November 1970 memo to Kissinger, he was rearranging his top staff at the CIA. Abbot Smith, the agency’s chief of intelligence estimates, was being replaced in order to “bring to the national estimates process a new, more imaginative look.” Helms said at the time it was part of his move to bring in new blood among top agency leadership. He really, however, was caving into White House demands.

Once Nixon forced the CIA to buckle on this issue, he would continue to do it throughout his presidency. The bond between the president and the agency, once strong during the Kennedy and Johnson administrations, was broken.

Ray Locker is the Washington enterprise editor of USA TODAY and author of Nixon’s Gamble: How a President’s Own Secret Government Destroyed His Administration (October 2015). 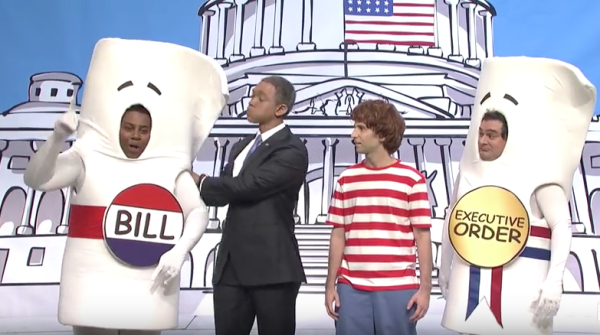