Anne Hathaway celebrated the New Year by hitting back at paparazzi.

The Oscar-winning actress, whose pregnancy was revealed in late November, posted a bikini photo on her Instagram account after spotting photographers taking pictures of her during a recent vacation.

“Happy 2016 to my beautiful Instafriends!” Hathaway wrote in the picture’s caption, before explaining why she put the image online. “So, posting a bikini pic is a little out of character for me, but just now while I was at the beach I noticed I was being photographed. I figure if this kind of photo is going to be out in the world it should at least be an image that makes me happy (and be one that was taken with my consent. And with a filter.”

Hathaway closed the caption with a smiley face emoticon and a wish for fans and friends to enjoy “love, light and blessings for the year ahead!”

Hathaway and her husband, Adam Shulman, never publicly confirmed the pregnancy reports last year. The couple married in 2012, after having dated for four years.

Hathaway will next be seen in Alice Through the Looking Glass, the sequel to Alice in Wonderland, which arrives in theaters on May 27. 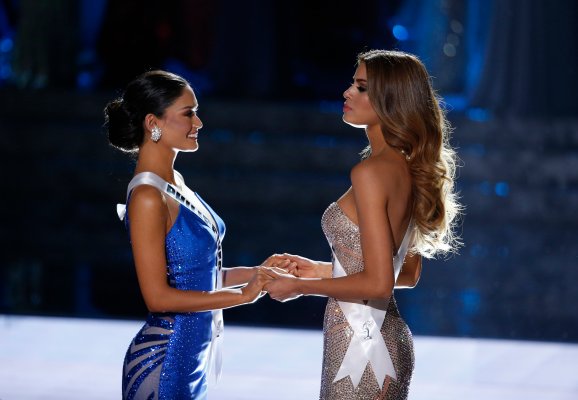 Miss Universe Says She Won't Share Her Crown With Miss Colombia
Next Up: Editor's Pick