Fresh off a two-week vacation, President Obama is spending his first week back at the White House talking gun control. On Monday, the President is meeting in the Oval Office with Attorney General Loretta Lynch, FBI Director James Comey and the deputy director of the ATF to discuss executive actions he can take to combat gun violence in America, and on Thursday he will participate in a gun control town hall discussion hosted by CNN.

President Obama began reconsidering taking executive action on gun control in the wake of the mass shooting at an Oregon community college. At the time, Obama was reportedly considering a reboot of a 2013 proposal that would expand the definition of who is considered a gun dealer and is therefore required conduct background checks on potential buyers. An administration official said in October that the timing on the gun executive action was up in the air, but it seems to be taking center stage as the President kicks off the first week of his final year in office.

Obama has had no luck getting substantive gun control legislation passed in Congress, despite a series of mass shootings during his second term. Over the course of his two terms in office, Obama has delivered speeches on gun violence in the wake of nearly a dozen tragedies. He usually struck a somber tone, but following the Oregon college shooting in October he was visibly angered by the fact that he was discussing the same issue yet again. The bulk of his frustration has been directed at Congress, which hasn’t budged on gun control during Obama’s time in office.

“Our thoughts and prayers are not enough. It’s not enough,” Obama said hours after the shooting at Umpqua Community College. “It does not capture the heartache and grief and anger that we should feel. And it does nothing to prevent this carnage from being inflicted someplace else in America — next week, or a couple of months from now.” 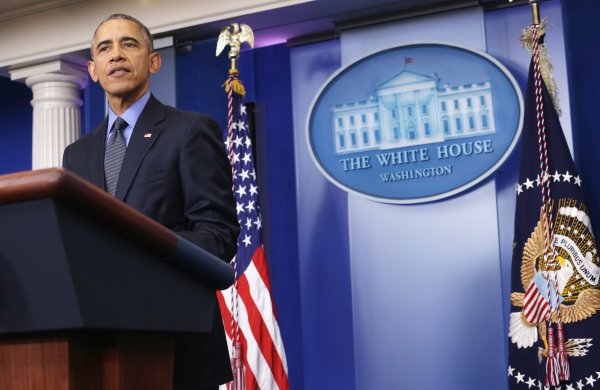 Obama to Discuss Gun Control Plans With Attorney General
Next Up: Editor's Pick