Republican presidential candidate Donald Trump released his first television ad of the campaign on Monday, a provocative 30-second spot that presents some of the businessman’s most controversial proposals.

An email about the ad from Trump’s campaign said it will air in Iowa and New Hampshire beginning on Tuesday. The candidate has been reluctant to air television ads, noting how far ahead he’s gotten without them, but has now promised to spend at least $2 million per week on ad buys. The email said the team has $1.1 million for television allocated in Iowa and close to $1 million spent in New Hampshire.

According to the Washington Post, which first reported on the ad, Trump said he has six to eight ads in production and the businessman’s buy will “go on for months.”

The ad opens with a black and white shot of President Obama and former Secretary of State Hillary Clinton, before quickly switching to photos of the couple that carried out the deadly attack in San Bernardino, Calif.

Clinton and Obama, a deep-toned voice over artist says, are two politicians who won’t call “radical Islamic terrorism” what it is. But not Trump. It goes on to note a handful of the proposals Trump has called for: a temporary ban on Muslims, upping the ante against ISIS, and building a wall to close off the southern U.S. border.

The proposals are among Trump’s most radical–and the ones that have garnered him stark criticism from the White House, officials from which have said proposing a ban on Muslims should “disqualify” Trump for the presidency. Yet, they’ve also helped the candidate win free press coverage over the past several months of the campaign, and have been largely met with satisfaction from his supporters. Trump has been among the leading contenders for the Republican nomination in early primary state and national polling for months. 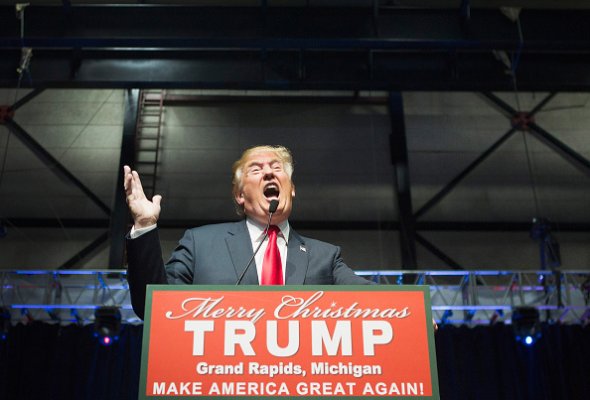