Sherlock‘s fourth season still doesn’t have an airdate—after all, Benedict Cumberbatch has a Dr. Strange movie to film. But to tide fans over, the show is putting out a holiday special, The Abominable Bride, premiering Jan. 1 on BBC and hitting movie theaters on Jan. 5 and 6. Unlike previous Sherlock episodes, all set in the modern day, this one-off will take place in Sir Arthur Conan Doyle’s original setting, the Victorian era. Creator Steven Moffat spoke to TIME about Benedict Cumberbatch’s sex appeal, how to incorporate strong women into the antiquated setting and why he hates Twitter.

TIME: How did the idea to set this in the Victorian era came about?

Steven Moffat: It was something that Mark and I had been talking about ever since the show began: could we ever do the joke of a brief sequence in the Victorian era and justify it by whatever means—a party or something? And then when it came up that we were going to be doing a special to tide everyone over until the next series we just thought, why don’t we go whole hog? Why pretend? Why not just do a Victorian oner?

And we had to talk everyone into it, that it wasn’t just a stunt and we had a story that was better served by being Victorian than it would be by modern day. By doing it in this era, we could do a proper Gothic ghost story that was the one thing. So we talked to the BBC and then to Benedict and Martin. Martin had all these penetrating questions and Benedict asked if he could have a haircut.

How does this fit into the trajectory of the show?

It’s a standalone. It’s connected to the main series because it’s our version but transposed back in time into the original setting.

Sherlock fans often take to Reddit or social media to posit theories about the show, and that rabid fandom has been incorporated into the show. When Sherlock “died” last season, the show ran through many fan theories about how he would be resurrected. What are the benefits and pitfalls of responding to fans in that way?

People think we spend a lot of time on Tumblr or something, but we don’t really. It’s lovely that there is a fan response. We’re really flattered by it. But there’s an awful lot of stuff out there, and we don’t spend time looking at it.

So all the theories in that episode, and that kiss that fans had been wanting for so long, that’s happenstance?

This happened when Doyle first killed off Sherlock and all sorts of people were writing really fan fiction about how he could have survived. P.G. Wodehouse wrote a version of it. So this has all happened before. We were aware vaguely that people were sussing away at it, but we weren’t directly responding to fandom. The vast majority of the audience would not call themselves “Cumberbitches.” You always have to have your eye on the wide audience.

I certainly hope not. I think there’s a terrible danger in social media for writers. When writers come onto Sherlock or Dr. Who I always tell them, “Close your Twitter account. Move away from all that. I don’t want to see you on that.” They never listen to me, but what I always tell them is the criticism will hurt you and the praise will kill you.

You start writing with the wrong voice in your head, and you’re no longer addressing the audience at large, you’re addressing a tiny little niche. And that’s the beginning of the end of your show. It’s like if a comedian only catered his act towards the one heckler. It doesn’t make sense.

Simply trying to determine what people like and give it to them is wrong. In truth what I should say is that I actually don’t do any audience research because it’s a very good way to tell what they liked about last year. You don’t know what people are going to want next and you’re not going to find it in either what people say they want or they liked the last time. That information isn’t available. Anybody who says they can tell you that is a charlatan. There’s no formula. Tell the story you want to tell and are passionate about and if you’re lucky, it’ll be a big hit. If you’re unlucky, it will be a disaster. And most of the time, it’ll be just OK.

The show is nominally about two men, but it’s had very strong and complex female characters. How do you maintain that as you move the show back to the Victorian era?

The biggest single problem for us in making it Victorian was the female voice. There aren’t any female voices in the original Victorian Sherlock Holmes stories. There’s hardly any female characters, they don’t speak and they’re not interesting.

Mrs. Hudson barely speaks. There is no Molly Hooper. Mary Watson disappears once her plot function has been served. So we had to find a way to take all our versions of those characters back into a Victorian setting in which culturally and realistically they wouldn’t have had the opportunity to be talking very much. We wanted to be faithful to Doyle who sidelined those characters without sidelining them. It was tricky, and we took it on head-on.

You’ll see what we’ve done about that. It’s not subtle.

What have the challenges been getting Benedict Cumberbatch and Martin Freeman to set now that they are both bona fide movie stars?

It’s a problem to schedule them. They both have huge movie careers and the reality is financially or prestige-wise, they don’t need to do it anymore. So it is difficult to get everyone in the same place but so long as everybody is willing to try to make it work, it will carry on.

Benedict Cumberbatch, mainly thanks to Sherlock, has become a sex symbol with his own following—they call themselves Cumberbitches. Did you expect that when you started the show?
I’m hardly the person to ask. I’m many things but not a judge of Benedict Cumberbatch’s sexiness. He doesn’t seem sexy at all to me. No, I never expected that. It’s great when it happens and it helps. But I think people have lots of reasons for watching Benedict and lots of reasons for watching Sherlock besides his sex appeal. 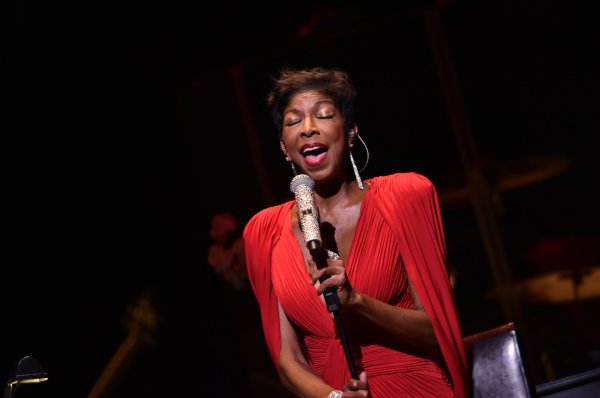 Singer Natalie Cole Dead at 65
Next Up: Editor's Pick