Ben Carson’s presidential campaign went through a big shakeup Thursday, with his two top aides resigning at once.

Communications director Doug Watts and campaign manager Barry Bennett both quit after simmering tensions within Carson’s camp boiled over, with much of the resentment focused on Carson’s relationship with political commentator Armstrong Williams. Williams has no official role in the campaign, but holds sway over the candidate and has gone rogue in recent weeks, organizing media appearances without consent of the official campaign.

Bennett spoke to TIME about the Williams problem and his decision to leave.

TIME: What led to your decision to resign?

Bennett: I had a call scheduled with Ben this morning at 9:30 to go over the end of the quarter, and I called him to tell him that we’d raised more money than any other Republican candidate again this quarter, that we’d even broken our own record from last quarter, but that my frustration level was boiling over and I thought that it would be best if I resigned and he found somebody else to run the campaign.

What contributed to that mounting frustration?

The straw that broke the camel’s back, per se, was the interviews that he [Carson] did on December 23 that Armstrong arranged that we didn’t know about, where he said that every job was on the table… And I’m like, we have 150 staff people who all went home for Christmas thinking that their jobs were on the line. And that was stupid. First of all, that’s not a good press story… Two.. we ruined everybody’s holiday. So I spent the holiday talking to everybody trying to convince them that everything was fine, and I just got angrier and angrier about it. And I prayed about it, and the Serenity Prayer came to mind, you know, there’s some things you just can’t change.

What else has Armstrong done that you’ve taken issue with?

The New York Times [story] about Dewy Clarridge. He insisted on a Sally Quinn interview with the Post that was extremely harmful and literally every appearance on New Day. He also leaked to the press that we were going to Jordan before we even took off, putting our lives at risk.
Armstrong doesn’t have an official position in the campaign, so why do you think he has such influence on Dr. Carson?

I don’t know. I think they need some psychologists to figure that out.

Did Doug’s decision to resign come from a similar thought process?

What do you think your and Doug’s departure means for the campaign moving forward?

Well, you know a lot of people have left today, not just us. But we leave millions of dollars in the bank, and a good ground game going, great data operation going. The people we’ve left behind are smart, competent people… They need to work very hard and find a way to win Iowa.

How did Dr. Carson take the news that you were resigning?

He was surprised when I told him that I was resigning, and he asked me to think about it, and I told him I had.

What’s up next for you?

Hopefully some sun and sand. 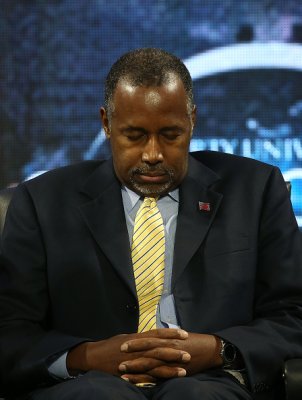