Former Florida Gov. Jeb Bush’s campaign is reallocating resources for the tumultuous final weeks before voters go to the polls in Iowa and New Hampshire.

Amid a tight fundraising climate for Bush, who is still struggling in the polls, Bush is canceling $3 million in television ads scheduled to run in January in Iowa and South Carolina and devoting most of the resources to bolstering his lagging effort in New Hampshire, where Bush is facing increasing pressure from Marco Rubio, Chris Christie, and John Kasich. The move comes as Bush’s super PAC, Right to Rise, has increased its television buys to give the campaign more flexibility.

The focus on New Hampshire, where the campaign is also shifting the timing of some television buys, reflects an all-in strategy by Bush on the Granite State, which is where establishment-friendly Republicans are battling it out for the mantle of challenger to Ted Cruz and Donald Trump. Bush currently has 20 paid staffers and 5 campaign offices in the state, and next month will have 20 more staffers, almost all from Bush headquarters in Miami. About 10 staffers will also be deployed to each Iowa, South Carolina, and Nevada. Bush campaign staffers were informed of the news on Wednesday.

The reorganization is the campaign’s second major reallocation of resources. A budget crunch at the end of the third quarter led Bush to cut some staff, slash salaries, and shift some aides from the Miami to the field. Months earlier, it cut the salaries of its highest paid aides as fundraising slowed.

The shift to New Hampshire reflects the conditions on the ground in Iowa, where Bush has a field presence of more than 10 paid staffers but has failed to galvanize the support of likely caucus-goers. Bush had previously expressed hope he could compete in the state, but most Republicans now expect either Ted Cruz, who has unified conservatives, or Donald Trump to win the caucuses.

As a group that can accept unlimited donations, Right to Rise was always supposed to bear the brunt of the Bush effort’s television campaign. But the Bush campaign had also intended to take advantage of the lower ad rates available to candidates to do some advertising on its own. The campaign reserved the time as long as six months ago, and the cancellation raises more doubts about the campaign’s fundraising tally for the final three months of the year.

Right to Rise, which raised more than $100 million in the first six months of 2015, has more than $11 million in ads scheduled to air in New Hampshire, providing the Bush campaign with additional support in the state.

In the most recent RealClearPolitics average of New Hampshire Polls, Bush sits in sixth place, with 8% of the support, behind Trump, Rubio, Kasich, Christie and Cruz. 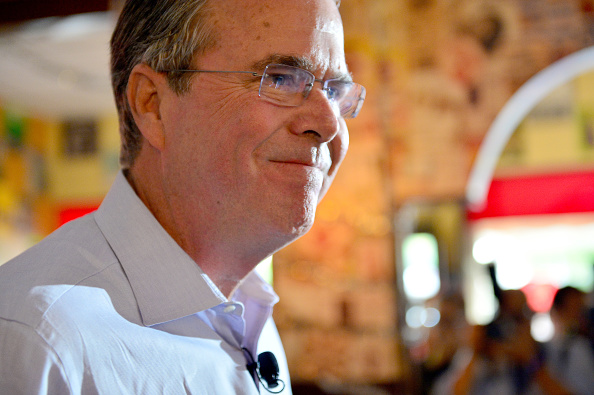