Saturn's 200-km moon Phoebe, seems likely to be a Centaur that was captured by that planet's gravity at some time in the past. Until spacecraft are sent to visit other Centaurs, our best idea of what they look like comes from images like this one, obtained by the Cassini space probe orbiting Saturn.
NASA/JPL/Space Science Institute
By Victor Luckerson

While the movie Armageddon taught us to be afraid of doomsday asteroids, it’s actually comets that may pose a bigger threat, according to new research by the Royal Astronomical Society.

Astronomers from Armagh Observatory and the University of Buckingham have determined that giant comets known as centaurs, though typically traveling far from earth, could potentially be deflected toward the planet when traveling through the orbits of outer planets like Jupiter and Saturn. Centaurs are 50 to 100 kilometers across, meaning they can be bigger than all the asteroids that have been found to pass near Earth to date.

“If we are right, then these distant comets could be a serious hazard, and it’s time to understand them better,” University of Buckingham professor Bill Napier said in a statement.

The researchers calculate that a centaur should cross the Earth’s orbit once every 40,000 to 100,000 years. The comets disintegrate as they approach Earth, spreading dust and larger fragments that can still be multiple kilometers wide. Documented environmental upheavals in 10,800 B.C. and 2,300 B.C., as well the death of the dinosaurs 65 million years ago, may have been the result of centaurs. 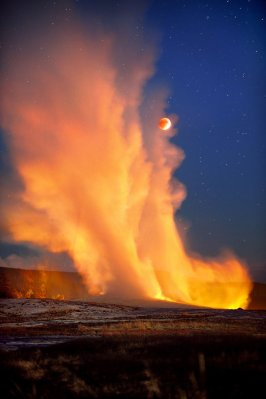 See an Awesome Photo of the Super Blood Moon Eclipse at Old Faithful
Next Up: Editor's Pick