Nothing grabs the attention of the American military like a member of the “axis of evil” firing rockets close to a U.S. Navy aircraft carrier, the biggest stick in the Pentagon’s massive arsenal.

That’s just what Iran did Saturday, shooting several unguided rockets about 1,500 yards from the USS Harry S. Truman and a pair of smaller U.S. and French warships in the Strait of Hormuz. That’s the bottleneck between the Persian Gulf and Arabian Sea through which 17 million barrels of oil, 20% of world demand, flows daily.

“Firing weapons so close to passing coalition ships and commercial traffic within an internationally recognized maritime traffic lane is unsafe, unprofessional, and inconsistent with international maritime law,” Navy Commander Kevin Stephens said Wednesday from U.S. 5th Fleet headquarters in Bahrain. It marked the third time since October 2014 that an Iranian vessel had launched rockets “within visual range” of a U.S. aircraft carrier, he said, adding that the most recent launches were “much closer” than the earlier ones. The Pentagon would only say that “several” rockets were fired; it didn’t specify a number.

It’s part of a decades-old pattern of Iranian provocations. U.S. officials said the rockets were not aimed at the ships, which were headed into the Persian Gulf. They were fired basically parallel to the vessels’ path of travel, 23 minutes after Iran warned they would be launched.

Usually, as in this case, such provocative acts are carried out by Iranian Revolutionary Guard units, sort of the wild card of the Iranian government. The Revolutionary Guard “is generally loyal to Iran’s political hardliners and is clearly more politically influential than is Iran’s regular military,” according to a May report prepared for the U.S. Congress. Its “political influence has grown sharply as the regime has relied on it to suppress dissent.”

The trouble with any such act is that mistakes by either side could quickly turn violent. Such rockets might corkscrew out of control, threatening nearby ships, or U.S. intelligence could mistakenly conclude U.S. vessels were under attack. Both sides are familiar with that latter scenario: the USS Vincennes, erroneously thinking it was under attack, destroyed an Iranian airliner over the strait in 1988, killing all 290 aboard. That came on the heels of skirmishes that led the U.S. Navy to sink six Iranian vessels and the disabling of the USS Samuel B. Roberts by an Iranian mine.

The Strait of Hormuz is only 34 miles wide at its narrowest point. But the navigable part of the strait is 20 miles across, although shipping is supposed to use a pair of two-mile wide channels, one inbound and the other outbound. Iran borders the strait to the north and east, and it has a major naval base—and its key submarine base—close by.

Fathoming Tehran’s motives is always challenging. Iran has bridled under economic sanctions imposed by the U.S. and other nations due to its nuclear ambitions, although both sides struck a deal in October to delay them. Iran has always viewed the Strait of Hormuz as part of its neighborhood. It likes to flex its muscles there every once in awhile, U.S. Navy officials say.

The Truman, its deck crammed with warplanes, recently arrived in the region to help in the fight against ISIS. Its presence so close to Iran infuriates Tehran, U.S. officials say. “War-fighting is the priority,” Rear Admiral Bret Batchelder, commander of Carrier Strike Group 8, said shortly after the 100,000-ton warship arrived. “That’s why we are here.” 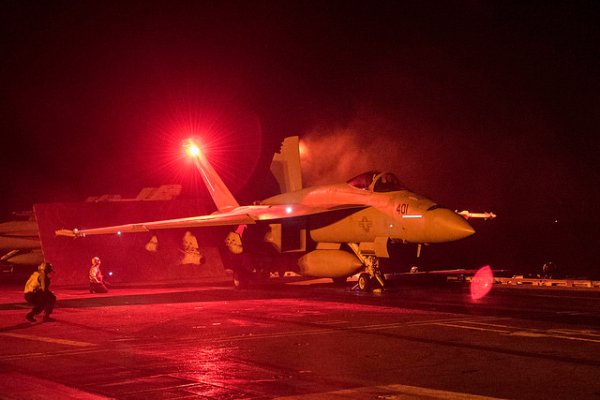