Why Hillary Clinton Keeps Calling on Kids at Town Halls

In recent months, the Democratic frontrunner has called on kids as young as six during town-hall meetings. The strategy ensures that she’ll get a softball question which she can answer by talking about being a grandmother and promising to fight for the next generation, two of her campaign’s favorite themes.

At times, the questions can feel a bit staged. At least three of the kids she’s called on have asked about gender pay equity, a central policy focus of her effort to attract women voters, if not exactly a top concern of most American middle school playgrounds.

At a Las Vegas town hall on Aug. 18, a young girl asked Clinton about it. “Do you think when you’re president you’ll be paid as much as a male?” At a town hall in Coralville, Iowa, on Nov. 3, another young girl asked “Why does my dad get paid more than my mom?”

And at a town hall Tuesday in Portsmouth, N.H., a nine-year-old boy named Relic Reilly noted: “My mother, over there, is complaining that she does not get much more money than my father.”

Reilly’s halting question, at times a little hard to follow, was panned on social media for sounding staged. (His mother told a reporter they talk about the issue at home sometimes.) And Clinton’s 2008 campaign admitted planting a question with a college student at a forum.

That doesn’t mean the Clinton campaign is behind the kids’ questions. The kind of parents who take the day off of work and school to bring their kids to a Democratic town hall are likely to spend most of the drive there talking about what they would ask if called on.

But for Clinton, the questions are softballs she can knock out of the park.

At an Oct. 5 event in Manchester, N.H., a 10-year-old girl asked Clinton, “by the time I get to college, what would you like the United States to be like?” Clinton joked that she had “a little time, but not a lot” to change the country in that time, leading to a brief chant of “Eight years! Eight years!” from the crowd.

At a July 28 event in New Hampshire, a young boy asked Clinton “What do you think is the most important part of life?” while a Boy Scout in uniform at a Nov. 7 forum in Orangeburg, S.C., asked what “character traits” she learned from her time as a Girl Scout, both questions that allowed her to wax philosophically.

The toughest question came long before Clinton was running, back at an April 2014 event in Portland, Ore. A six-year-old girl asked Clinton: “In 2016, would you prefer to be called Madame President or Mrs. President?” Clinton, who at that stage was required to ritualistically disavow interest in a presidential campaign, found that one so tricky that she said nothing and simply set the microphone down, ending the Q&A.

But the best question came from 10-year-old Hannah Tandy at a Dec. 22 forum in Keota, Iowa. “What are you going to do about all this bullying?” she asked.

It was a question from the heart and from the concerns of actual 10-year-olds. And Clinton switched out of candidate mode for a minute.

“Can you tell me a little bit more about why that’s on your mind?” she asked.

The girl explained that she has asthma and that other kids talk about it behind her back. Clinton pulled her in for a hug, in a moment from this campaign that was perhaps the most reminiscent of how Bill Clinton used to stump back in the day.

“I really do think we need more love and kindness in our country,” she said. “I think we are not treating each other with the respect and the care that we should show toward each other. And that’s why it’s important to stand up to bullies wherever they are, and why we shouldn’t let anybody bully his way into the presidency.”

From hugging a 10-year-old to bashing Donald Trump, it was a pitch perfect moment for the Democratic candidate—and exactly the reason why she’ll keep calling on kids. 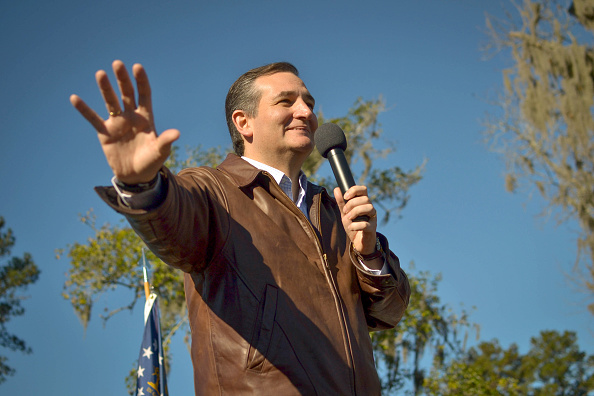 Cruz Courts Christians at Faith Gathering
Next Up: Editor's Pick