With both campaigning in eastern Iowa, Christie blasted Rubio for saying he was opposed to the recent omnibus spending bill but then skipping the vote on the Senate floor.

“Dude, show up to work,” Christie said at a town hall event. “Show up to work and vote no. And if you don’t like it, quit!”

“He gives a good speech, Marco, and I want to hear his stirring speech that’s going to try to persuade people on the floor of the Senate not to vote for this awful spending bill,” Christie said,” except he never showed up. He was totally opposed to it and didn’t go there to vote no. Then what’s it matter that you’re opposed to it? He matters as much as I do. I don’t have a vote in the Senate. He has one just didn’t go. Only in Washington could you have the guts to stand up and say I’m against something that you have a vote to vote no on and then just not go and then put out a press release after it gets passed and say this is why I was opposed to it.”

It was a direct attack in an opening riff laced with Rubio barbs. Criticizing President Obama as well as his Republican rivals currently serving in the Senate as being unprepared for the Oval Office, Christie said, “We don’t need a president again who needs on the job training in the Oval Office,” adding, “he was a U.S. Senator, by definition they do nothing.”

Noting that Rubio, Ted Cruz, and Rand Paul sparred at the last GOP debate over their voting records, Christie joked, “Shouldn’t that be a pretty thing to figure out. There only two choices—if you were there.”

“We need a Washington to normal people dictionary that converts the words they use that we as regular Americans can understand,” he added.

Rubio and Christie are on a collision-course as they seek to consolidate establishment support within the GOP, but Christie told reporters he wasn’t singling out Rubio because of it. “Everybody’s crowding my space,” he said, adding he views everyone in the 13-candidate field as competition.

Christie’s attack is also notable given his own attendance record in New Jersey. According to WNYC reporter Matt Katz, Christie will have spent all or part of 60% of the days in 2015 out of his home state.

The criticism came the same day as an ad from a super PAC supporting former Florida Gov. Jeb Bush used a similar line of attack against Rubio. 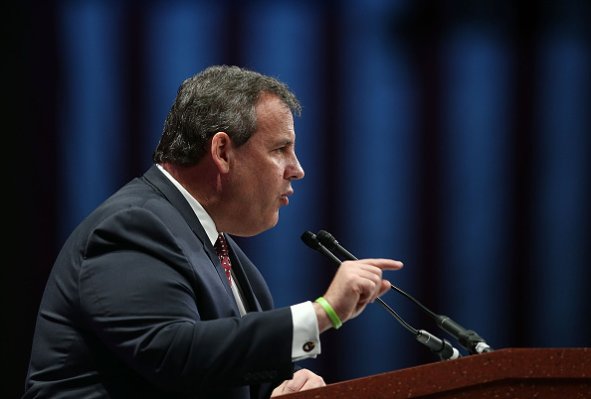