Earlier this month, Macaulay Culkin revisited his famous Home Alone role and revealed what Kevin McCallister turned out like after being abandoned by his family at Christmas and threatened repeatedly by a pair of burglars (spoiler: not that great).

Now one of the Wet Bandits has responded in a video of his own, and he’s pretty terrified by the kid who once dropped an iron on his face and electrocuted him.

In the video, Marv (a.k.a. Daniel Stern) attempts to make contact with his partner in crime. “Come find me, Harry, I’m scared!” he cries in a dark room. “The kid is back — I saw it on the Internet! He’s coming to get us. He’s coming for all the home invaders and he’s gonna come get us!”

The clip (which you can see above) was posted by Stern, who also reflected on the 25th anniversary of Home Alone during a Reddit AMA on Christmas Eve. During the Q&A, he revealed his favorite of the traps Kevin set for Harry (Joe Pesci) and Marv was the tarantula crawling on his face.

“Not only was it really fun and funny to do but it was a personal challenge to overcome my fear of having something that ICKY and deadly crawling on my face,” Stern wrote. “It was even freakier because I had to do that scream, which meant my mouth was wide open too — and I was afraid the little bastard might take a detour down my throat! AAAAAAAAAH!”

You can see his full Reddit AMA here. And Merry Christmas, ya filthy animals. 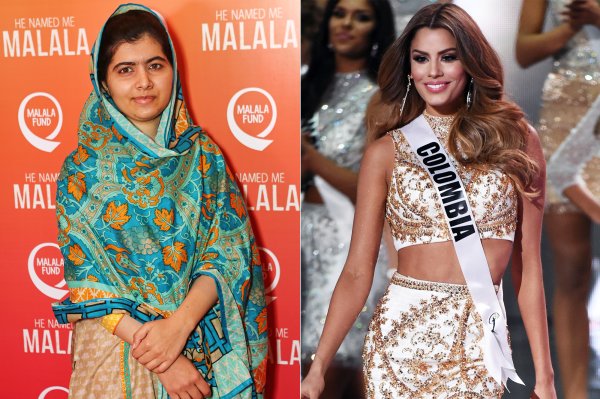 Who Said It, Miss Colombia or a Nobel Peace Prize Winner?
Next Up: Editor's Pick