Eagles of Death Metal frontman Jesse Hughes and drummer Julian Dorio visit a memorial that pays homage to the victims of the terrorist attacks at Le Bataclan on December 8, 2015 in Paris, France
David Wolff - Patrick—Getty Images
By Melody Chiu / People

Less than a month after 89 people were killed at an Eagles of Death Metal concert at the Bataclan in Paris, the band was back on stage performing at a U2 concert.

But getting to that point was a struggle, the band reveals in a new interview with Rolling Stone – and Bono had a big hand in supporting them through the tragedy.

“Bono knows that I’m a Christian, and he also knows I’m a mama’s boy,” bandmate Jesse Hughes tells the outlet. “The very next day [after the attack], a courier came with a phone that had a note that said, ‘This is from Bono. Make sure you call your mom.’ I thought that was awesome.”

Shortly after, the U2 frontman hopped on the phone with Hughes, who at the time “didn’t know how I was ever going to get back on stage again,” he says. “He just prayed with me on the phone. He kept my head off of things.”

When U2 visited the memorial site, the band left Eagles of Death Metal lyrics. “I knew a lot of the people personally that didn’t make it and that little detail, just on a personal note, is something that nobody else would ever know that it mattered, but it mattered to me,” says Hughes about the gesture.

After performing on U2’s stage, “I feel bound to France forever now,” says Hughes. “The reaction of the country in general was wonderful to me, and so U2 gave me the opportunity to come back and go through my mourning process a little more naturally instead of feeling like I left my heart there.”

Hughes and his bandmate Josh Homme (who was not playing at the Bataclan the night of the attack), have launched the Play It Forward charity campaign to benefit those affected by the attacks.

“Roses grow in s—, and this is a s—ty situation,” says Hughes. “It’s funny how things this terrible, when you’re close to them, how they stop your life in its tracks. This is where I realize the importance of the arts and music to be able to move quickly to unite people.” 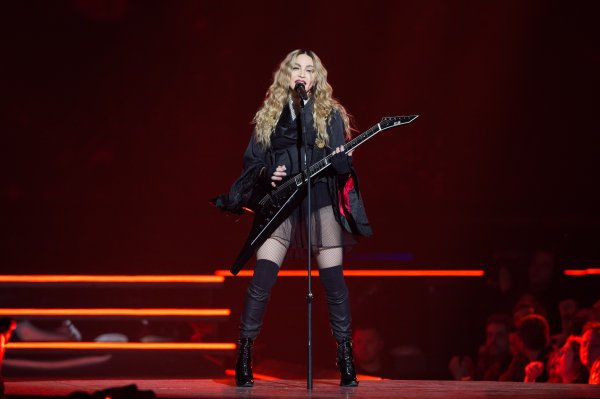 Madonna Goes to Court to Force Son to Come Home for the Holidays
Next Up: Editor's Pick