Yemen Is at Risk of 'Balkanization,' Warns the U.N.'s Human-Rights Chief

Tribesmen loyal to the Houthi forces shout slogans and raise their weapons during a gathering in Yemen's capital Sana'a on Dec. 15, 2015
Khaled Abdullah—Reuters
By Mark Rivett-Carnac

Failure to secure peace “would inevitably push the country into an irreversible process of Balkanization, the consequences of which would lie outside of anyone’s control,” Zeid told the 15-member body, according to a U.N. statement. “A failed state in Yemen would almost inevitably create safe havens for radical … groups such as the so-called ISIS,” he said using an acronym to refer to the Islamic State of Iraq and Greater Syria.

The conflict in Yemen pits the government of President Abdel Rabbo Mansour Hadi, which is backed by a Saudi-led coalition with the support of the U.S., against Houthi forces, which have ties to Iran.

Fighting in the nine-month war has killed 2,700 civilians, displaced 2.5 million people internally and left 21 million in need of humanitarian aid, according to U.N. statistics. 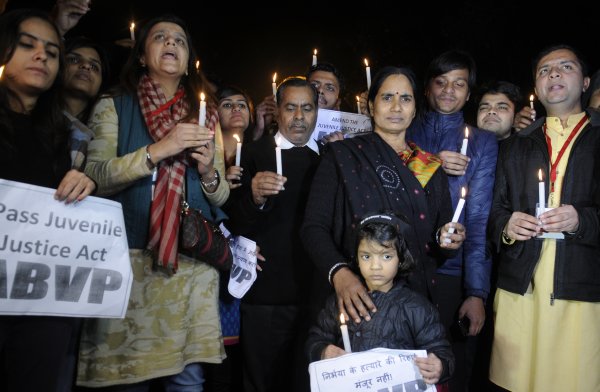 India Passes Bill to Lower Juvenile Criminal Age to 16
Next Up: Editor's Pick