Could Steve Harvey be back hosting Miss Universe in 2016?

According to one of the producer’s behind Sunday’s show, Harvey is more than welcome back.

“I definitely want him back, and I would hate to see him not come back,” Mark Shapiro said on The Jim Rome Show. “He’s going to want a shot to redeem himself.”

Shapiro speculated that fans would be ready to forgive Harvey, who corrected his mistake live on air and has apologized multiple times.

“Look, the world forgives, the world forgets. It could happen to the best of us,” said Shapiro. “He was so well intended, and he’s such a good guy, and it was really such a mistake that I hope people don’t hold this over him other than for just a good laugh and let it pass.”

On Sunday, Harvey said he felt “horrible for the two countries” involved in the mixup.

“It was a mistake,” he told reporters during a press conference after the show in Las Vegas. “The dishonorable thing would be to just leave it like it was. It didn’t deserve to happen that way, but it happened from an honest mistake.”

Miss Colombia, the 21-year-old runner-up, spent some downtime after the fiasco.

“Gutiérrez went to Miami to spend a few days relaxing with her family after the incident,” a representative for the Concurso Nacional de la Belleza de Colombia previously told PEOPLE. “She wants to spend a few quiet days with her family over the holidays and unwind, and she plans on addressing the media when she goes back to Colombia.”

“After the storm comes the calm,” Gutiérrez wrote. “I want to thank each and everyone of you who have sent messages of support and strength.” 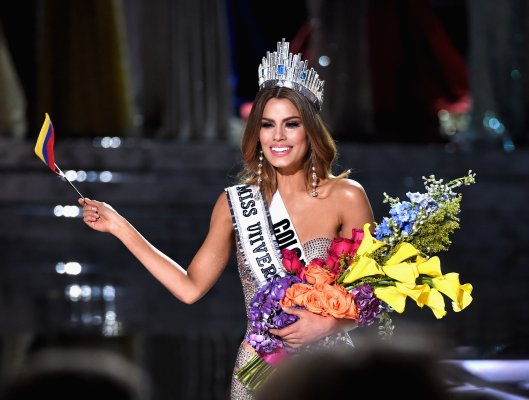