Concussion Expert: Over 90% of NFL Players Have Brain Disease

Bennet Omalu, a Nigeria-born neuropathologist, first discovered chronic encephalopathy (CTE) in an NFL player when he saw the debilitating disease in the brain of Mike Webster, the Hall of Fame center for the Pittsburgh Steelers who died in 2002. This finding sparked a chain of events that ultimately forced the NFL to settle a class-action lawsuit from retired players and raised unprecedented awareness of the dangers of football head trauma.

In the much-anticipated film Concussion, out Dec. 25, Will Smith portrays Omalu, who in a fiery conversation with TIME talks about the future of head trauma research, his detractors, and thoughts on the new movie. This interview has been edited for brevity and clarity.

Right now, CTE can only be officially diagnosed post-mortem. How close are we to finding a way to diagnose CTE in the living?

To make a diagnosis, all you need is a reasonable degree of certainly. But now we, as a pathologists, need more objective measures because symptoms, to a certain degree, are subjective. We need markers: biochemical markets, radiological markers. But we should also realize that radiological markers, biochemical markers wouldn’t give 100% degree of certainly. It is not an absolute science. It’s not an absolute science like physics or mathematics.

They could have maybe minimal symptoms, mild symptoms, moderate symptoms, or severe symptoms. I meet with retired football players. Some are well-dressed, some are well-spoken, but when you talk to them personally they will admit to you that they are having problems. But they are managing their problems. They have impaired memory, they’re having mood problems. They are being treated by their psychiatrists. So I think 90 to 100% of all of them will have some residual problem from their exposure to thousands of blows to the head.

This was why, when I came across this disease, I sent a letter to the NFL: let us have a prospective study to examine the brain of every retired NFL player who died. This is the best way to confirm that we’re not speculating. When I proposed this they did not even acknowledge our letter.

The attacks and backlash against your CTE research form the tension of the Concussion movie. Do you think your race played a significant role in the attacks?

Yes. Let me tell you, the establishment was really upset with me because I was in my 30s when I did this, I was a foreigner, and I’m an African-American. The NIH put together a committee to define a diagnosis. You know they never invited me? The man who described the disease. The NIH, even doctors in high places, why don’t you f–king leave Omalu alone? I feel like the movie has shown I was acting out of love, because I love this country.

What was the lowest moment of the backlash against your research. Did you receive death threats?

Whatever the NFL did to me, the NFL is a corporation. I forgive them. What bothered me most were my fellow doctors. You know there are doctors out there who are denying that I did the Mike Webster autopsy. Is it envy? Is it jealousy. It’s more than that. What is it? Is this America? There were doctors — doctors — treating me like I was subhuman.

How did they treat you like you were subhuman? Any examples?

Look at the AP article [from Dec. 17]. The doctor saying I did not describe [CTE] to people. I spent my own money to examine [WWE wrestler] Chris Benoit’s brain. The WWE came after me. There were all kinds of statements about me. That I was a quack, that I did not adhere to scientific method.

And after that, I said you know what, there’s this thing called PTSD in military veterans. I spent my own money, my own time, I identified CTE in an Iraq war veteran. No Department of Defense official has reached out to me to say hey, Bennet, what is this about? Some petty people say Omalu didn’t name [CTE]. Go out there, check the literature — the story speaks for itself! What have I done? What have I f–king done? Do you want me to go back to Nigeria where I came from? This is ridiculous.

I was out there in the cold, dying and only Hollywood extended out their hand.

Would you let your son play football?

My son is 6. I wouldn’t let my six-year-old son near any football field. And if any coach asks my son to play football, I’ll sue that coach, and I’ll sue the school.

What did you think of the movie?

Everybody should see the movie on Christmas day. It will make you proud to be an American. It will teach that the truth will only make us better people—whether you are an Omalu hater, or an Omalu lover.

What was your reaction to Will Smith’s portrayal of you?

Will Smith is a good friend of mine now. He’s a good man. His acting in this movie reaffirms what I believed this country to be when I was growing up in Nigeria: We can make the impossible possible. Like he has said, he was a football father. He didn’t want to do this movie. But when he met me, he saw the sincerity in me and the selflessness in me, and that convinced him to do this movie.

The Bennet Omalu Foundation launched on Dec. 15. Why start the foundation, and what are the goals?

It’s been an American story. (Concussion producers) Ridley Scott, and his wife Giannina Facio, dreamt a dream, an impossible dream, to find a cure for CTE. The goal is simply to tap into that great American ingenuity to support the families and the sufferers of this disease. To support the education and the awareness of CTE because there is so much misrepresentation of the science out there. There’s so much focus on concussions, but the focus should be on exposure to repeated blows to the head. And this is not anti-football or anti- high-impact contact sports, it’s simply about enlightenment.

The NIH — isn’t this something they should all be ashamed of? That a doctor, a young doctor like me from Africa, who knew nothing about football, came to America and discovered a disease they could not discover? In spite of all the hundreds of millions of dollars given to the NIH on brain trauma research, how was it that someone who didn’t have a dime of government money discovered this disease that has so much impact on this country? This is why we need the Bennet Omalu Foundation, we need new perspective!

The family of Dave Duerson, the former Chicago Bears safety who committed suicide in 2010 and was diagnosed with CTE post-mortem, has objected to his portrayal in the movie. In one scene, Duerson kicks you out of a medical conference and tells you to go back to Africa and “get away from our game.” The family has said that was manufactured. Did that happen?

The Duerson family is a family that is in pain. I empathize with that. You know what, I lost my father last year. My father was 91. I knew he was going to die. But when he died, I wept for 2 days. My six-year-old son felt so bad for me he got me a teddy bear and gave it to me to comfort me. I empathize with them. I have no comment. This is a movie based on a true story.

I met him one on one. I know what he said to me. At the beginning many NFL players, not just him, they fed into the NFL narrative of me. Just like the Seau family. Remember, at some point they said I shouldn’t touch their father. That I should go away. That I was quack. The Seau family said that to me, remember? I wept that day, but I have forgiven them, because I know what it is to feel pain.

The Duerson family, this is something personal to them. In their mind, they believe the movie was making their father look like a bad person. That wasn’t what I saw. People empathize with him. Dave Duerson was a victim of this entire CTE quagmire.

Dave Duerson didn’t kick me out. That is not true. Remember, the people who kicked me out were the NFL. In that scene, there was some dramatization. Just like many players who believed what they were being told, he acted that out. Not out of enmity, but just out of someone who has been fed false information.

How has your life changed because of this movie?

My life has not changed. This has never been about me. My life changed in 2005 when I published that paper [on Webster having CTE]. I’m still suffering from that. All I’m asking now is that people should leave me alone. 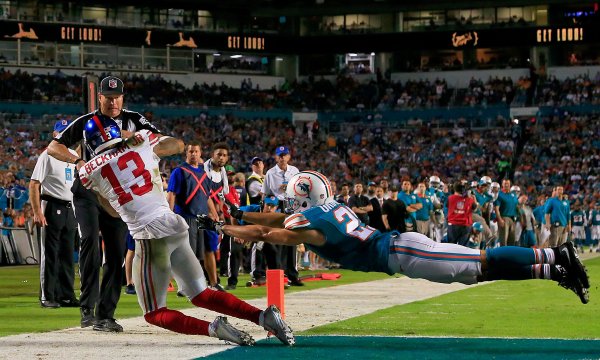 Watch Odell Beckham Score Another Amazing Touch Down
Next Up: Editor's Pick