R. Kelly Under Fire for Walking Out of An Interview

Controversial R&B singer R. Kelly walked off the set of HuffPost Live on Monday during an interview gone bad with host Caroline Modarressy-Tehrani. The singer, who has been accused but was never convicted of sexual abuse by multiple women, was questioned about the impact those allegations have had on his music career by the reporter.

That’s when things took a turn.

“I know the difference between a negative question and a positive one so if I think it’s negative I’m going to walk,” the singer threatened. When the singer was asked if he had a “healthy relationship with sex” given the content on many of his albums—from “12 Play” to “Sex Weed”— he responded thusly: “I did not come here to get interrogated. I didn’t come here for a deposition. Do you know what a deposition is?”

The singer, who wore sunglasses throughout the entire interview, repeated that he did not “come here for a deposition” as the reporter continued to ask questions. “This is not about music,” Kelly said. “This is about disrespect.”

He later asked the interviewer about her drinking habits and commented on her appearance. Kelly, talking over the reporter, said that he has “love” for both his fans and those who are openly critical of his music given the multiple sexual assault allegations against him. “I love you too,” he said.

“You don’t need to give me any of your love, sir,” the reporter responded.

Watch the full exchange below. 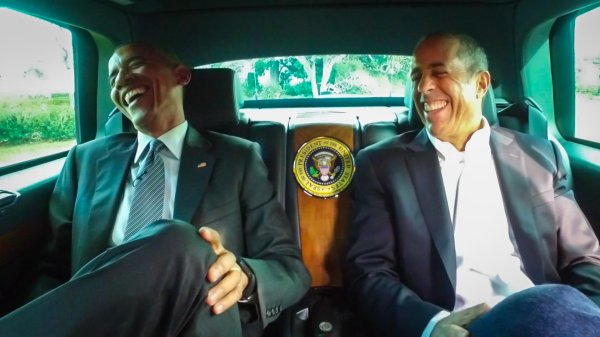 Obama Will Appear on Seinfeld's Comedians in Cars Getting Coffee
Next Up: Editor's Pick