What Lindsey Graham's Exit Says About the Republican Race

Senator Lindsey Graham, a Republican from South Carolina and 2016 presidential candidate, right, places his hand over his heart during the Pledge of Allegiance at the Stafford County GOP Christmas Party during a campaign stop at Newick's Lobster House in Dover, New Hampshire, U.S., on Friday, Dec. 18, 2015.
Bloomberg—Bloomberg via Getty Images
By Alex Altman

Not everyone who runs for President runs to win. Every four years, candidates submit to the punishing ordeal of a national campaign because the spectacle affords some other opportunity: to sell books or audition for a different job or promote a signature issue.

Lindsey Graham, who bowed out of the GOP nominating contest Monday morning, fell into the last camp. The South Carolina senator was the pragmatist in a purity contest, a dealmaker with moderate stances on immigration and climate change and a voice of compromise in a party craving combat. His long Washington resume represented all that Republican voters say they don’t want in a 2016 nominee. No one thrives, as Graham has, in the mud pit of Palmetto State politics without a keen sense of his strengths and weaknesses.

But the crafty pool shark still saw an angle to play. He jumped into the race on June 1 to promote his cherished cause: rebuilding support for a muscular foreign policy in a party increasingly weary of war. “I’m afraid some Americans have grown tired of fighting,” he warned in his announcement speech. “I have bad news to share with you — the radical Islamists are not tired of fighting you.”

Yet if Graham hoped to fill the hole in the field for a defense hawk, that space has since grown crowded. In the wake of the attacks in Paris and San Bernardino, Calif., the fight against ISIS has seized center stage in the GOP presidential race. Rivals once leery of military intervention in the Middle East have embraced the prospect of putting U.S. boots on the ground in Iraq or Syria and made bellicose rhetoric against radical Islamic terrorism the centerpiece of their stump speeches.

If the shift seemed to validate Graham’s policy, it also stripped him of his most potent weapon. Even his rhetorical flourishes (“I am going to unleash the American military and I am going to kick their ass”) were drowned out by the Donald Trump show. Graham tried to borrow his buddy John McCain’s campaign blueprint, hitting the New Hampshire town-hall circuit in hopes that his folksy charm and his arsenal of one-liners would build a following. But he struggled to draw crowds; one business roundtable in Bedford, N.H., over the summer drew a dozen participants, while his first campaign stop in Iowa was interrupted by gun-rights activists who circulated a fact sheet outlining times Graham allegedly spoke in opposition to the Second Amendment.

Graham’s polls were even more anemic. He never cracked the main debate stage. A CBS News/YouGov poll of South Carolina released Sunday pegged the state’s senior Senator at 1%. As the GOP nominating contest evolves into a referendum on foreign policy, it became clear that Graham’s path would never open.

In the end, he was driven from the race by a deadline. This is the last day that Graham could opt to remove his name from the ballot for the Palmetto State primary. No proud statesman wants to be a punchline. Now he is poised to play kingmaker instead, should he choose to throw his support and political machinery behind one of his rivals.

As for Graham, he returns to the Senate, where his predilection for crossing the aisle has made him a frequent negotiating partner for Democrats. At a town hall in New Hampshire on Sunday, he offered to play the Tip O’Neill to Hillary Clinton’s Ronald Reagan, should a Clinton White House pledge to tackle ISIS head-on. And if a Republican wins in 2016, Graham’s advisers want his name in the mix for a Cabinet post. He fizzled in New Hampshire, but the Pentagon wouldn’t be a terrible alternative.

Amid escalating fears of terrorism, Graham drops out of the race knowing that even if his niche evaporated, his signature issue is alive and well. “The centerpiece of my campaign has been securing our nation,” he said in a video released Monday, announcing the suspension of his campaign. “I got into this race to put forward a plan to win a war we cannot afford to lose, and to turn back the tide of isolationism that was rising in our party. I believe we made enormous progress in this effort.”

With reporting by Philip Elliott

Read Next: Lindsey Graham: I Would Compromise if Clinton Won 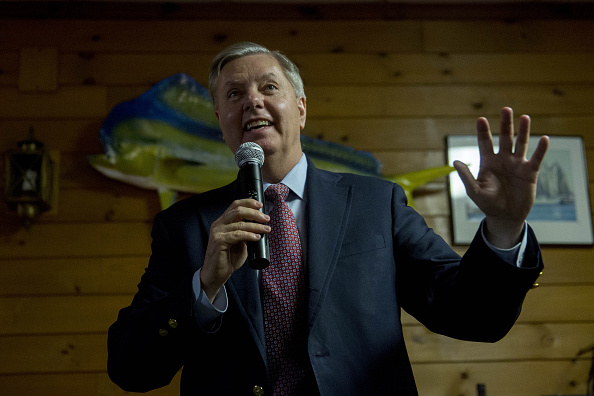 Graham: I Would Compromise If Clinton Won
Next Up: Editor's Pick