For years, Bernie Sanders has supported broad middle-class tax hikes to pay for the ambitious government program at the heart of his progressive agenda: his proposed Medicare-for-all program, in the style of Canada and European systems.

But now, the Vermont Senator appears to be charting a different course. Sanders, who is fighting an uphill battle to appeal to a wider base in the Democratic primary, said on Sunday he would not raise taxes on the middle class for any reason except to pay for paid family leave.

Sanders’ commitment to not raise taxes, made on NBC’s Meet the Press, is a departure from the rhetoric earlier in his campaign. It also comes close to matching Hillary Clinton’s pledge not to raise taxes on the middle class, which the campaign has previously criticized.

NBC’s Chuck Todd asked Sanders on Sunday morning if paid family leave was the only measure Sanders would raise taxes for. “Is that the only thing you plan on raising taxes on the middle class on?” Todd said.

“Yes, that’s right,” Sanders said. “Look, we have seen a huge transfer of wealth from the middle-class to the top one-tenth of 1%.”

Aides to Sanders deny that his position is a reversal, saying that Sanders’ Medicare-for-all program, which in the 2013 Senate version includes a 2.2% income tax increase for the middle class, never counted as a tax hike because it would ultimately save families money. And they say to Sanders say he will still be able to pay for big-ticket items like Medicare-for-all, tuition-free public college, infrastructure programs and others, by taxing the wealthy.

But Sanders’ statement backs away from the previous months of his campaign, and leaves him open to criticism from economists who frown on across-the-board pledges like it and liberals who worry it could constrain a progressive agenda.

Hillary Clinton, who is leading Sanders in polls for the Democratic nomination, has already promised not to raise taxes on families earning under $250,000 a year. She and her aides have slammed Sanders for not making the same pledge.

In the debate on Saturday night, Sanders lashed back with a defense of certain taxes increases. ‘When Secretary Clinton says, ‘I’m not going raise taxes on the middle class,’ let me tell you what she is saying,” Sanders said. “She is disagreeing with FDR on Social Security, LBJ on Medicare and with the vast majority of progressive Democrats in the House and the Senate, who today are fighting to end the disgrace of the United States being the only major country on Earth that doesn’t provide paid family and medical leave.”

“Why [do] you have a candidate who claims to be a progressive that is essentially laying out an approach to problems that is a Republican approach?” Weaver said of Clinton. “It’s an instinctive move back to the corporate centrism that the Democratic rank and file has disavowed.”

And Sanders has long favored a middle-class income tax hike to pay for his most ambitious program, Medicare-for-all, which he introduced as a bill in the Senate in 2013. The plan, which his campaign has been touting for months, was to be paid for by a 2.2% tax increase, as well as a 6.7% tax on wages paid by employers that Clinton aides say would results in a total 9% tax increase, because employers pass taxes on to their workers in the form of wage cuts.

Aides say that Sanders’ Medicare-for-all can be paid for without the 2.2% tax increase on employees. His policy team is working out a new plan.

“We are still developing a Medicare-for-all plan,” said Sanders senior policy advisor Warren Gunnels. “This plan will save middle class families thousands of dollars a year because they will no longer be paying premiums or deductibles to private health insurance companies.”

In the past, Sanders has also called for closing corporate tax loopholes, raising the estate tax and taxing Wall Street regulation to pay for some of more ambitious initiatives. 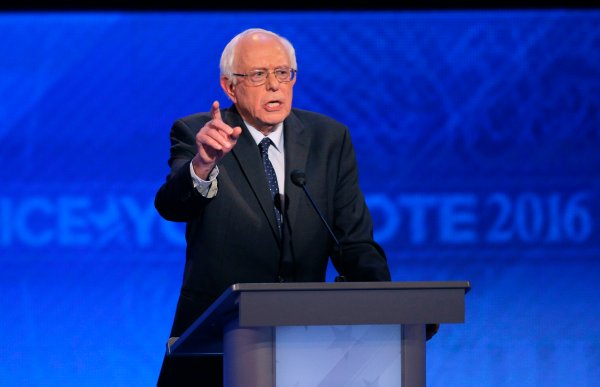 Bernie Sanders Calls Drug Addiction a 'Disease' Not a Crime
Next Up: Editor's Pick