Clinton Hits Back at O'Malley Over Wall Street Donations

Martin O’Malley hit Hillary Clinton over an answer — from the last debate.

The former Maryland governor criticized Clinton for her ties to Wall Street, bringing up her response to a question on the topic at the Nov. 14 debate, when she noted that she worked with Wall Street firms after the Sept. 11 attacks.

“I have demonstrated the ability have the backbone to take on Wall Street in ways Secretary Clinton never ever has,” O’Malley said Saturday. “In fact, in the last debate, very shamefully, she tried to hide her cozy relationship with Wall Street big banks by invoking the attacks of 9/11.”

In the previous debate, Clinton said she “spent a lot of time” in downtown Manhattan and on Wall Street during rebuilding efforts after the 9/11 terror attacks.

“That was good for New York. It was good for the economy, and it was a way to rebuke the terrorists who had attacked our country,” she said then.

Clinton said “two hedge fund billionaires” are running ads against her in New Hampshire because of the threat she poses. The candidate also argued that the majority of her financial support thus far is coming from “students and teachers.”

She also challenged the governor’s own relationship with Wall Street, especially during 2011 and 2012, when he was chair of the Democratic Governors Association, which raises money to support Democrats running for governor across the country.

“When Governor O’Malley was heading the Democratic Governors Association he had no trouble at all going to Wall Street to raise money to run campaigns for Democratic governors,” she said. 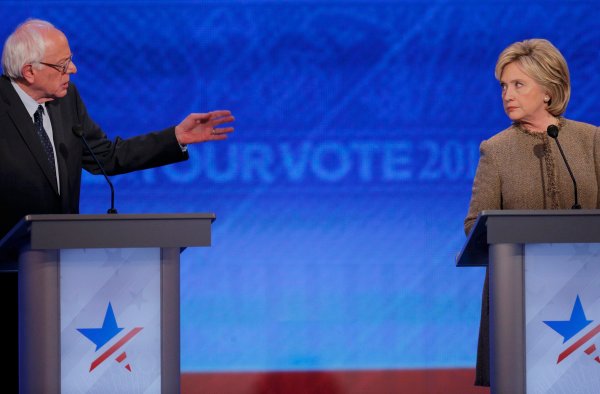 Clinton and Sanders Spar Over Corporate Support
Next Up: Editor's Pick