Photograph by Erik Madigan Heck for TIME
By TIME Staff

When Adele released 25 on Nov. 18, her new album shattered sales records, earning the biggest first-week sales on record by selling 3.38 million copies in the United States. One place you couldn’t find Adele’s album? On streaming services like Spotify and Apple Music.

“I believe music should be an event,” she said in one of a series of recent interviews with TIME, speaking for the first time about the decision. “For me, all albums that come out, I’m excited about leading up to release day. I don’t use streaming. I buy my music. I download it, and I buy a physical [copy] just to make up for the fact that someone else somewhere isn’t. It’s a bit disposable, streaming.”

“I know that streaming music is the future, but it’s not the only way to consume music,” she said. “I can’t pledge allegiance to something that I don’t know how I feel about yet.”

While Adele said that she was under pressure on both sides—to stream or not to stream—ultimately, the choice came down to her. “I’m proud of my decision,” she said. “I would have been proud even if the album flopped. I would have been proud because I stuck to my guns, and I think it’s really important as an artist that you do that.”

Adele’s decision follows Taylor Swift’s move in 2014 to remove her own music from Spotify; later, she sent an open letter to Apple asking that the world’s biggest music retailer change its policies on how artists are compensated. “It was amazing,” she says of Swift’s stand. “I love her—how powerful she is. We’ll get lumped together now because of it, but I think we would both feel the ability to say yes or no to things even if we weren’t successful.”

For more on Adele, read the issue of TIME on stands Dec. 21. 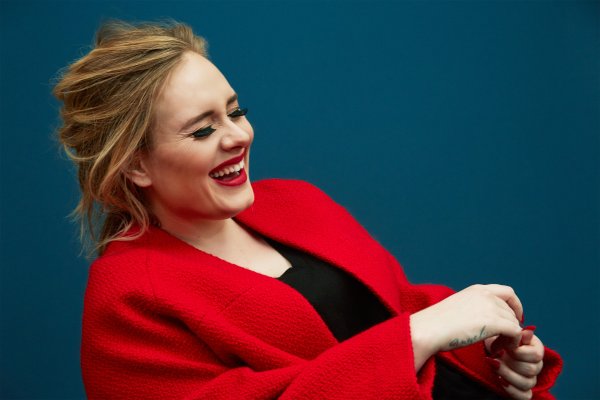 Behind TIME's Cover With Adele
Next Up: Editor's Pick