Bernie Sanders’ campaign’s breach of Hillary Clinton’s voter data may have been more extensive than previously reported, according to a person with knowledge of investigation.

According to data reviewed by TIME, the Sanders campaign appears to have obtained files with lists of voters that the Clinton campaign had cultivated in 10 early states including Iowa and New Hampshire.

Beyond simply reviewing the data, the logs show the Sanders staffers took deliberate steps to harvest and store the information. According to the logs, the Sanders staff created from scratch no fewer than 24 lists—consisting entirely of data pulled down from the Clinton campaign’s database—and saved them to their personal folders.

The logs show the Sanders campaign accessed the Clinton data for nearly one hour beginning around 10:40 p.m. Wednesday. The Sanders staffers were apparently able to view unique voter information along with accompanying information about how likely the voters were to vote for the various candidates, crucial information that the Clinton campaign has likely spent millions of dollars to collect.

The Clinton campaign called for a clear accounting of the breach.

Moreover, the Sanders staffers who carried out the breach included a top lieutenant for the Vermont senator: Josh Uretsky, the national data director for the campaign.

The Sanders campaign denied that it had downloaded any data, saying that it did not retain information from the Clinton campaign.

“They didn’t download it—they went in looked around,” said Sanders spokesman Michael Briggs, who announced Thursday the campaign was firing Utersky and that they were treating the matter seriously.

Uretsky also told MSNBC that the campaign “did not export any records or voter file data” and was simply trying “to document and understand the scope of the problem.”

In a harsh rebuke to the Vermont Senator, the Democratic National Committee cut the Sanders campaign off from its voter files.

Sanders is now threatening to sue the DNC in federal court.

“The leadership of the DNC is now actively attempting to undermine our campaign,” said Sanders campaign manager Jeff Weaver at a press conference on Friday afternoon in Washington. If the DNC does not allow the campaign to access its files, “we will be in federal court this afternoon seeking immediate relief.”

“They are not going to sabotage our campaign—one of the strongest grassroots campaigns in modern history,” Weaver added.

The Democratic National Committee holds a rich repository of national voting data that is accessible to all the campaigns through a software called NGP VAN. Over the course of the presidential primary, each campaign including Sanders and Clinton have added unique data to their files that identifies individual voters and helps the candidates target individual voters. The data they develop is a crucial tool for the presidential campaigns.

The Sanders campaign has said the NGP VAN data was vulnerable and that it had warned the DNC in October about problems with the software. Weaver said it was likely that other campaigns accessed Sanders’ voter files, but he did not provide evidence.

The compromised data reflects major financial investments by the Clinton campaign, and if the Sanders campaign did download and retain Clinton’s campaign data, it would mitigate some of the advantage she may have gained in voter outreach and list-building.

Sanders supporters have rallied to defend his campaign, signing at least one petition to remove Wasserman Schultz, as well as another signed by members of Democracy for America DFA calling for the DNC to open up the data to Sanders again.

“Taking away the voter file six weeks before Iowa over a vendor mistake isn’t just poor decision making—in the data-driven world of presidential campaigns, this move by the DNC amounts to political malpractice,” said Charles Chamberlain, executive director of DFA, which endorsed Sanders for president this week.

There are a number of major discrepancies between the Sanders’ campaign narrative and what the DNC and others familiar with the matter have said.

In addition, the Sanders campaign has said that it did not download or retain any of the Clinton campaign’s data, and Weaver reiterated that claim on Friday afternoon at a press conference in Washington. “This campaign does not possess any data, does not retain any data and does not want any data,” said Weaver.

But the records from the NGP VAN software indicate that Sanders staffers did in fact save data to its own folders.

Sanders campaign fired Uretsky shortly after it learned of the incident, and said it is considering firing other staffers who were involved.

“After discussion with the DNC it became clear that one of our staffers accessed some modeling data from another campaign,” spokesman Michael Briggs said in a statement. “That behavior is unacceptable and that staffer was immediately fired.” 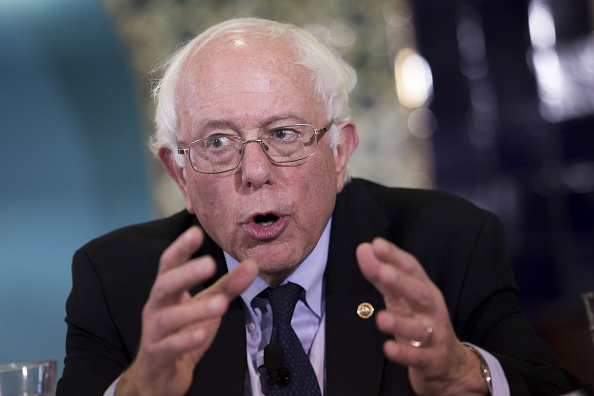