A New and Vivid Earthrise

Earth can be forgiven its vanity. We may have long ago learned that our flyspeck world does not sit at the center of the universe, that it’s a pint-sized planet in an afterthought solar system, in an outer province of an ordinary galaxy. But say this for Earth: it’s gorgeous.

In a universe of planets that too often are burnt umber or ice white or slate gray, ours is a riot of brilliant colors and swirling patterns. That loveliness is even more striking when pictures of the Earth are taken from the moon—with the bleakness of our only natural satellite contrasting sharply with the brightness of our home planet.

NASA has been photographing the Earth and moon in tandem for a long time—from the first black and white image taken by the Lunar Orbiter spacecraft in 1966, to the transformative Earthrise photo taken by the crew of Apollo 8 in 1968, to the celebrated blue marble picture captured by the crew of Apollo 17 four years later. Now comes what might be the most vivid of them all: a composite image taken by a pair of cameras aboard the Lunar Reconnaissance Orbiter (LRO), which has been orbiting the moon since 2009.

The image shows the complete disk of Earth, with Africa, the Arabian peninsula and South America clearly visible, rising over the moon’s Compton crater, which is on the lunar far side and thus never visible from Earth. Unlike the images taken by the Apollo crews, which were captured by with the snap of an ordinary—if high-quality camera—on film that had to be hand-carried home, LRO’s picture was created first by rolling the spacecraft on its side as it orbited 83 miles (134 km) above the lunar surface, in order to maximize its field of vision, firing two cameras at once—one black and white and one color—and then digitally combining and refining the images.

That may lack the you-are-there intimacy an astronaut in a spacecraft can capture, but the richness of the LRO portrait—with the sapphire of the Earth’s oceans, the white swirl of its clouds, the almost liquid look of the rolling lunar surface—is surely enough to qualify it as one of NASA’s finest. The moon has not felt the press of human boots for 43 years, and it could be many more years before it does again. But the view from the world we visited and left remains spellbinding. 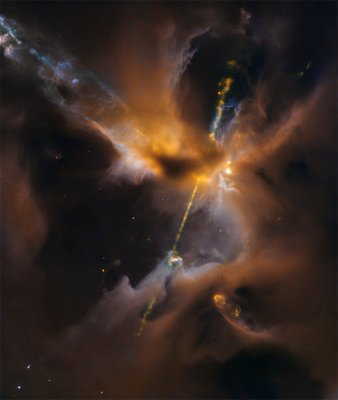 NASA Finds a Cosmic 'Lightsaber' Far, Far Away
Next Up: Editor's Pick