Violence Against Muslim Women Is Racist and Misogynist

Larycia Hawkins, a Christian who is wearing a hijab over Advent in solidarity with Muslims, attends service at St. Martin Episcopal Church in Chicago on Sunday, Dec. 13, 2015.
Chicago Tribune—TNS via Getty Images
Ideas
By Omise'eke Natasha Tinsley
Omise'eke Natasha Tinsley is associate professor of African and African Diaspora Studies at the University of Texas at Austin and a Public Voices Fellow for the OpEd Project.

Face haloed by a gilded purple scarf, Larycia Hawkins, an African-American Christian associate professor of political science at Wheaton College, posted a Christmas Facebook picture of herself in hijab. This is her Advent practice, she explained, urging others to follow suit: to don the hijab in embodied solidarity with sisters facing Islamophobic violence for wearing headscarves.

“As part of my Advent Worship, I will wear the hijab to work at Wheaton College, to play in Chi-town, in the airport and on the airplane … and at church,” she said. “A large scale movement of Women in Solidarity with Hijabs is my Christmas #‎wish this year.” She also equated the Christian God with the Muslim one. In a controversial move, Wheaton College suspended her for these remarks.

Hawkins embodies a point we don’t hear often enough: Islamophobic violence against women is a black feminist issue. To pass over the recent attacks against Muslim women is to concede ground to the mounting terror on women of color that endangers us all.

Within hours of the Nov. 13 attacks on Paris, Islamophobic violence erupted in Europe and North America. But in contrast to the persecution of Muslim men after 9/11, recent violence seems to disproportionately target women.

In London, Yoshiyuki Shinohara pushed a Muslim woman in front of an oncoming underground train. In New York, a sixth-grade girl was attacked in middle school by boys who attempted to remove her hijab and called her ISIS while beating her. In Toronto, a Muslim mother was beaten and robbed after dropping her children at school, and later that week two women were assaulted on the subway by men calling them terrorists.

Violence against Muslim women spiked again after the mass shooting in San Bernardino, Calif., followed by the widespread broadcast of pictures of shooter Tashfeen Malik wearing a hijab. Women in hijab became labeled the new face of terrorism as several news headlines inquired: “Is Tashfeen Malik a new kind of female terrorist?”

Black women are among the Muslims targeted by Islamophobic violence. Witness the case of artist Kameelah Rashid, an African-American Muslim in hijab forced off a flight to Istanbul and questioned for hours by the FBI. Traumatized by the event, Rashid noted: “I don’t think there is a resurgence of Islamophobia after the Paris attacks. I think it never went away. It’s becoming more legitimized.”

More than 250,000 black Muslim women live in the United States, and globally the black female Muslim population reaches tens of millions. Nigeria alone counts 60 million Muslim women and Guinea, Niger and the Democratic Republic of Congo are among sub-Saharan African nations with majority Muslim populations. To be sure, many black Muslims don’t wear hijab. But like Rashid, any black woman identifiable as Muslim is now subject to state and interpersonal violence when moving across national lines.

This Islamophobic violence against women is part of a social climate in which violence against black women and girls seems to increasingly be tolerated. Weeks before the middle-school assault in New York, a black girl at Spring Valley High in South Carolina was thrown from her desk and slammed to the ground by school-based police officer Ben Fields. Days after assaults on Muslim women riding public transport in London and Toronto, fired Oklahoma City cop Daniel Holtzclaw stood trial for 36 counts of sexual assault against black women. One of those rapes occurred in front of a parked school bus.

These are incidences of a climate of intersecting racism and misogyny, which, as Rashid says, speaks less to a “resurgence” of violence against women of color than to the disturbing fact such violence is “becoming more legitimized.” The impulse to attack a girl in hijab and to throw a black girl across a schoolroom aren’t the same, but they are related. Both reflect ways in which girls and women with African ancestral heritage continue to be denied the privileges of full citizenship—and full humanity—in North America and Europe.

It’s time for black women—including those who are not Muslim—and Muslim women—including those who are not black—to recognize we have common cause. Lovely as Hawkins’ gesture is, I don’t advocate that all black women wear hijab this season. But I do advocate that we all lift any veils that prevent us from seeing Muslim women’s issues are our issues, too. 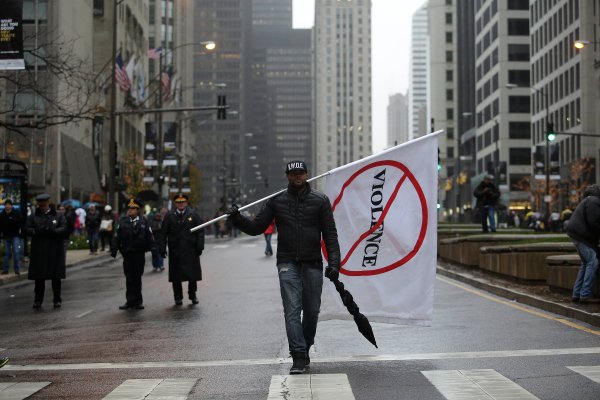