From Oculus to HTC, lots of companies are betting on virtual reality. Put one of their headsets on, and you’re transported to another world. But Microsoft is taking a different tack: Wear its HoloLens headset, and suddenly holographic images appear on the walls and floor of the physical space around you. Instead of virtual reality, or VR, Microsoft calls this “mixed reality.”

I’ve tried all the major VR headsets out there, but I’ve been itching to get my hands on the HoloLens since Microsoft unveiled it in January. I finally had my chance this week. In an effort to woo coders to the new platform, Microsoft is opening a HoloLens developer’s showcase at its new flagship store in New York City. The company invited me along with other journalists to come check it out on Wednesday.

First, I had the distance between my pupils measured with a special tool, a calibration step that Microsoft says will happen automatically in the HoloLenses of the future. Microsoft representatives then walked me through three different demos: A shooter-style video game, a product showcase simulation, and a creative tool.

The video game involved shooting bug-looking robotic aliens as they crawled out of the walls around me, Alien-style. The aliens shot fireballs and lasers, and you had to duck and dodge around them. It was visually impressive, but a little bit boring compared to more fully realized console shooters. Gaming-wise, the HoloLens is probably better suited to slower-paced games like Minecraft. The product showcase demo helped show off how companies might use HoloLens to put together a presentation or demonstrate a conceptual project. (In this case, a Swiss-style watch, which I could blow up into individual parts to examine them more closely.)

The best of the three demos, though, was the creative software. Imagine Microsoft Paint, except in three dimensions. You can rotate your designs, walking around, under and above them to make sure you get all the details right. First I got to play around with an underwater SCUBA scene, copying and pasting fish at will. Then I played around with a Star Wars X-wing, changing the color scheme from red to blue. There was an option to 3D-print my design, but sadly there were no such devices in sight.

All told, I walked away from the experience excited to see what creative applications HoloLens developers might come up with—it’s rarely a tool’s creators that find the most interesting uses of that tool. But there was one big drawback. Microsoft’s HoloLens videos give the impression that wearing the headset means holograms will appear all around you at once. But the actual field of vision in which those holograms appear is fairly limited. Microsoft says this helps keep wearers aware of their physical environment, but it was jarring after seeing all those videos the company has made.

At this point, Microsoft hasn’t said when the HoloLens will be available commercially. But programmers interested in coding for the device, which runs Windows 10, can now apply to spend $3,000 on a developer’s edition, which begins shipping in the first quarter of 2016. 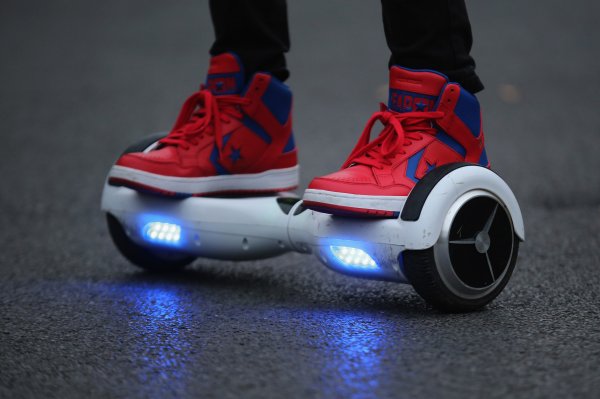 Here's the One Major U.S. Airline That Hasn't Banned 'Hoverboards'
Next Up: Editor's Pick