A Yezidi Woman Who Escaped ISIS Slavery Tells Her Story

Nadia, a young Iraqi Yezidi who was abducted into slavery by members of ISIS, is photographed in the U.S.
Kirsten Luce for TIME
By Charlotte Alter

It is not easy for Nadia to tell this story, and she’s been doing it all day. She’s about my age, wearing a leather jacket just like mine, and her hair is fastened with the same drugstore hair clip that is holding up my own. But when I smile at her, she looks away. She doesn’t make eye contact very often, but when she does, her eyes are impenetrably black.

She’s steeling herself, because she knows why I’m here. I have to ask about what happened when ISIS fighters came to her village in northern Iraq, where they took her and the other young women, how many men she was sold to, what happened in those rooms in Mosul. She will answer as much as she can, because she is brave, because she escaped, and because she wants the world to know what is happening to the Yezidis in Iraq. But that doesn’t make it easy.

Twenty-one-year-old Nadia Murad Basee Taha is in New York City to testify in front of the U.N. Security Council about the plight of the Yezidi ethnic and religious minority under ISIS. “I cannot imagine how painful it must be every time you are asked to recount your experience,” U.S. Ambassador to the U.N. Samantha Power said to Nadia after her testimony on Wednesday. “And your being here and speaking so bravely to all of us is a testament to your resilience and your dignity — and it’s of course the most powerful rejection of what ISIL stands for.”

ISIS has targeted the Yezidi population of approximately 230,000 people in the area, considered “kafir” or “nonbelievers” because they do not practice Islam, in what is widely considered to be a genocide. Over 5,200 Yezidis were abducted in 2014 and at least 3,400 are still in ISIS captivity, according to community leaders, and most, if not all, of the captives are women (male captives are indoctrinated and forced to fight, or risk execution). Thousands more have been slaughtered, and over 400,000 Yezidis have been forced from their homes.

Even worse, ISIS has revived the institutional practice of slavery within its so-called caliphate, condoning the systematic rape and sexual enslavement of non-Muslim women. This practice is not only allowed inside ISIS, it is actively encouraged, and some survivors have reported that ISIS fighters believe that if a woman is raped by 10 Muslims, she will become converted. There is even a market for enslaved women within the caliphate, and girls are bought, sold, and traded among the fighters as commodities or rewards.

Nadia is in New York City to ask the U.N. Security Council to rescue the enslaved Yezidis and help them liberate their land from the militants. She’s also here to tell her story, with the help of Yazda, a U.S.-based nonprofit dedicated to supporting survivors of Yezidi genocide and women who have escaped from ISIS.

But soon she began to see images on TV, “horrific images,” she says. And one day in August, she was walking with her sister and saw fighters in her village. “I recognized, I said, ‘This is the same group that we have seen committing the crimes on the TV.’” She didn’t know she would meet them so soon.

Then, on Aug. 15, 2014, the fighters told everyone to walk to the school on the outskirts of town. It was lunchtime. On their way, Nadia and her family saw ISIS fighters “everywhere,” she remembers, “on the houses, on the streets, there were a lot of them.” Some of them were masked, others were not. They all spoke different languages.

The fighters separated the men from the women, and put Nadia and some other women on the second floor of the building. Then they murdered 312 men in one hour, according to a U.N. spokesman, including six of Nadia’s brothers and stepbrothers. Nadia witnessed it all. When they retook the area from ISIS, Kurdish forces also uncovered a mass grave of about 80 elderly women who had presumably been executed because they were too old and undesirable to be sold into slavery.

Those who remained, the women like Nadia who were considered young and attractive, were taken to the occupied Iraqi city of Mosul, where they stayed for three days before they were “distributed” among the fighters to be enslaved. “They gave us to them,” Nadia says. She recalls some women mussing up their hair to look less appealing to the fighters, in hopes they would be spared. Others smeared battery acid on their faces. “It did not help because in the mornings they would ask us again to wash our face and look pretty.”

Nadia’s niece, who was also kidnapped, witnessed a woman cutting her wrists. They heard stories of women jumping from bridges. And in one house in Mosul where Nadia was kept, an upstairs room was smeared with evidence of suffering. “There was blood and there were fingerprints of hands with the blood on the walls,” she says. Two women had killed themselves there.

Nadia never considered ending her own life, but she said she wished the militants would do it for her. “I did not want to kill myself — but I wanted them to kill me.”

Nadia, an Iraqi Yezidi who was abducted into slavery by members of ISIS, traveled to the U.S. to testify at the U.N.
Kirsten Luce for TIME

Every morning in Mosul, the women would be required to wash. Then, Nadia says, they would be taken to the Shari‘a court, where they would be photographed. The photographs would be posted on a wall in the court, along with the phone number of whichever militant or commander currently owned each woman, so that fighters could swap women among themselves.

One day, it was her turn. She was sitting in a room with all the other women, looking down. She was wearing a pink jacket. A fighter came in. “He told me, ‘The woman in the pink jacket, stand up for me,’” Nadia says. “When I raised my head I looked at him, this huge man, and I shouted and screamed.” He was very big, she says, with long hair and a long beard. She was sitting with her three nieces, they all held on to each other as the big man tried to drag her from the group. “They were beating us with sticks while we were holding one another,” she says. “He took me by force to the ground floor, and they were writing the names of those they were taking.”

As she was struggling with the big man, she saw a pair of small feet. It was another ISIS fighter, also there to get a Yezidi slave. Nadia, desperate, wanted to go with him because he had a smaller build than the first man. “I basically jumped on his feet, and I told him, I begged him, ‘Free me from this huge person, take me for yourself and I will do whatever you want,’” she says. “Then he took me for himself.”

Nadia’s new captor was tall and thin, with long hair but a trimmed beard. Something flickers over her face when she describes his “ugly mouth” with “teeth coming out of his lips.” I can’t tell whether it is laughter or pain.

This new man kept Nadia in a room with two doors. He prayed five times a day. He had a wife and a daughter named Sara, but Nadia never met them. One day he took her to his parents’ house in Mosul. “Then he one day forced me to dress for him and put make-up, I did, and in that black night, he did it,” she testified.

She told the hushed room that she tried to escape the rape and torture, but was captured. “That night, he beat me up, forced to undress, and put me in a room with six militants,” she told said in her testimony. “They continued to commit crimes to my body until I became unconscious.”

Nadia tells me none of her captors exhibited an ounce of regret for what they did to her. When one ISIS fighter was asked whether she was his wife, he announced, “‘This is not my wife, she is my sabia, she is my slave,’” Nadia recalls. “And then he fired shots in the sky, as a sign of happiness.”

She was finally able to escape in November 2014 after one of her captors left his house unlocked, and she sneaked away to safety. She was then transported to a refugee camp (she is purposely vague about how she got from captivity to the camp, perhaps to protect anyone who helped her) where she was selected for a program that takes refugees to Germany. Now she’s living near Stuttgart, but she does not feel at home there. “I left everyone, all the family members who are still in the camps, I left them,” she says. “But it’s better than the poverty and suffering that people endure in the camps.” She’s been brought to the U.S. to raise awareness about the plight of Yezidi girls still in captivity.

Nadia does not celebrate Christmas, but she has learned about the holiday since she’s been living in Germany. And she has a message for anyone celebrating Christmas this year: “If they’re celebrating and they want to help the poor, then they should help us.” 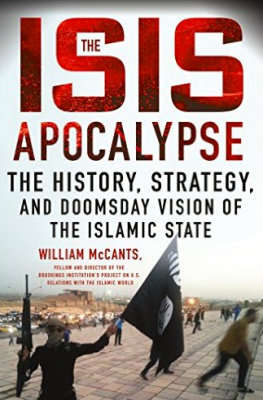 How Terrorists Convince Themselves to Kill
Next Up: Editor's Pick