Mike Honda: What My Time in a Japanese Internment Camp Taught Me About Hate

Rep. Mike Honda, D-Calif., holds a news conference with Vietnam veterans and their families to introduce the "Toxic Exposure Research and Family Support Act of 2014" on June 10, 2014.
Bill Clark—CQ-Roll Call,Inc.
Ideas
By Rep. Mike Honda
Mike Honda is a U.S Representative for California.

In 1988, President Ronald Reagan—the president whom Donald Trump and most of the Republican presidential candidates have said they admire the most—signed the Civil Liberties Act into law. This law recognized that the internment of Japanese Americans in the aftermath of Pearl Harbor was “without adequate security reasons” and was instead “motivated largely by racial prejudice, wartime hysteria, and a failure of political leadership.”

I was an infant in 1942 when my family and I were forcibly imprisoned at the Amache internment camp in Colorado. I spent the next three years of my life living behind barbed-wire fencing. Even after we were released, I, along with other Japanese-Americans, faced anti-Japanese slurs and insults in a post-World War II America. We developed a sense that somehow we had done something wrong. It was my father who helped me realize that our “crime” was simply being of Japanese ancestry. In a post-Pearl Harbor craze, this lineage was sufficient for the federal government to pass orders to detain and imprison an entire segment of American society—we were guilty solely by association.

The internment was an abuse of our Constitutional rights and instilled in me a lifelong belief that it is everyone’s responsibility to be vigilant and protect each other’s liberties. We must learn from the mistakes of our past to prevent reactionary policies that run contrary to the very nature of the freedom, rule of law and Constitution of our country.

Even though the majority of Republicans in Congress voted against the Civil Liberties Act in 1987, President Reagan demonstrated real political leadership by bucking his party and siding with the Democratic majority to sign this landmark legislation into law. President Reagan looked beyond the partisan divide of the time and did the right thing—holding our country accountable to its moral standards and acknowledging the internment of innocent Americans as a dark chapter in the American story.

Trump’s recent statements highlight just how far short he falls in living up to this example set by his own Presidential idol. While our nation widely regards the internment of Japanese-Americans as among the darkest chapters of American history, Trump has proclaimed that he would discard these lessons and have history repeat itself by suggesting that Muslims should face the same type of guilt by association and be collectively punished.

Trump’s ignorant and inflammatory proclamations—the banning of all Muslims, including Muslim Americans, from entering the United States; the creation of a Muslim database; having law enforcement monitor all mosques; and that the internment of Japanese Americans during World War II was acceptable—highlight just how dangerous and un-American a path he suggests. Trump’s dangerous rhetoric seeks to score cheap political points by preying upon the same climate of fear, hate and distrust that seized us after the Pearl Harbor attacks. And just today, another presidential candidate, Ben Carson, is calling for a McCarthy-like inquisition, accusing a Muslim-American organization of being directly involved in terrorist activity. Such slanderous and unfounded comments only fuel suspicions against an already scapegoated community.

Trump and others have successfully garnered attention with their provocative rhetoric, but that rhetoric has real consequences. Every day, there are threats to mosques and Muslim students, leaders and community members; in the last week alone, Muslim Americans were victim to at least 19 hate crimes. Political leaders and people who hold significant influence over the American people must take responsibility for their words. The price for TV ratings and cheap political points is forcing the more than 2 million Muslim Americans to live in fear of their own government and fellow Americans.

Our country is better than this. We are a nation that strives to foster openness, tolerance and equality—notions that are seemingly lost on political leaders that seek to make Muslims second-class citizens. Trump’s misguided plans are a far cry from making America great again; rather, Trump’s ideology would soon make America hate again.

Let us not give into hate and ignorance. Let us be the country of compassion and openness. We are a multiethnic, multireligious, multicultural nation. Our diversity is what gives us strength, and our respect for the Constitution, rule of law and American ideals is what unites us. The divisive hate mongering espoused by Trump and others moves America backwards and surrenders our future to the mistakes of the past. There are many challenges facing our country today, and we need to stand together to overcome these challenges as Americans. 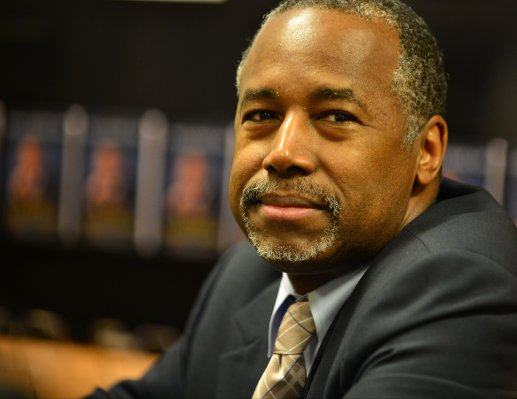 Muslim Leader to Ben Carson: Extremists Are Our Enemies, Too
Next Up: Editor's Pick