Homeland Security Increases Use of Facebook to Identify Terrorists

A Facebook logo is displayed for a photograph in Tiskilwa, Illinois, U.S.,Jan. 29, 2013.
Daniel Acker—Bloomberg/Getty Images
By Don Reisinger / Fortune

The Department of Homeland Security (DHS) is developing an initiative to use social media in identifying possible terrorist threats among visa applicants, the Wall Street Journal reports. The DHS would specifically focus on what visa applicants post to social media sites, like Faceboo and Twitter, to help them determine whether they may be a threat to the U.S.

Calls for increased social-media scrutiny have intensified in the days since the shootings in San Bernardino, after it was revealed that Tashfeen Malik, one of the alleged attackers, used social networks to voice her support for jihad before applying for a U.S. visa. Despite those postings, Malik’s visa application was approved by the U.S. in May 2014.

According to ABC News, in early 2014, the Obama administration decided to uphold a ban on evaluating visa applicants’ social-media profiles for fear of violating individual privacy. John Cohen, a former under-secretary at DHS and now a national security consultant for ABC News, told the news outlet on Monday that “immigration officials were not allowed to use or review social media as part of the screening process” for visas in 2014. The policy subsequently changed in late-2014, but social-media checks were still few and far between and even by then. Malik was already in the U.S. at that time.

Under the newly proposed policy, checking social media accounts would become a standard practice before determining whether a person should be allowed into the U.S., the Journal’s sources say.

However, at least some critics argue that the Obama administration’s desire to preserve civil liberties was a sound one, and perhaps one that should not be overturned so readily.

“U.S. government monitoring of social media… as part of granting or denying visas is troubling for a number of reasons,” says Fred Cate, a cybersecurity expert and vice president for research at Indiana University. “It could potentially violate the First Amendment to the Constitution, which blocks the government from interfering with freedom of expression—even of non-U.S. citizens. It could easily become an unintended cover for discrimination on the basis of race, religion, nationality, or political views.”

Cate conceded that the idea could have some merit if it was given “careful thought, clear standards, [and] effective oversight.” He added that if it’s implemented, it should be revisited “periodically to see if it is being used effectively, appropriately, and consistently with U.S. values.”

Since the San Bernardino attack, Silicon Valley has been under pressure from all corners of the political world. In a speech earlier this month, both President Obama and Democratic presidential hopeful Hillary Clinton called on technology companies to combat online terrorist activities. Meanwhile, Republican candidate Donald Trump asked Microsoft co-founder Bill Gates for help to “close that Internet up in some way,” and two senators introduced a bill that would require technology companies to alert federal law enforcement whenever they discover online terrorist activity.

While the rhetoric has ramped up, it’s long been known that militant groups such as ISIS adeptly use technology to their advantage. Just last month, President Obama called ISIS “a bunch of killers with social media.” Meanwhile, hacking collectives, including Anonymous and the Ghost Security Group, have been waging an ongoing cyberwar with alleged terrorists for well over a year.

For their part, tech companies have also worked to identify potentially dangerous content. In July, in fact, FBI Director James Comey said that the companies are “pretty good” at informing the U.S. government of potential threats posted on their services. They also work, with help from users who alert them to terrorist-related activity, to remove content.

“Facebook has zero tolerance for terrorists, terror propaganda, or the praising of terror activity and we work aggressively to remove it as soon as we become aware of it,” Facebook spokesman Andrew Souvall told Fortune last week. “If we become aware of a threat of imminent harm or a planned terror attack, our terms permit us to provide that information to law enforcement and we do.”

Still, it may be impossible for any popular site to remove all offending content. YouTube alone has over a billion users and hundreds of hours of video are uploaded to the site each minute. Add that to the massive amounts of content shared on Facebook, Twitter, Instagram, WhatsApp, and countless other services, and it’s clear that the Internet is overrun with content—both good and bad.

So, while companies may play a role in addressing issues, the DHS plan may also prove useful.

It’s at least an idea that Alphabet executive chairman Eric Schmidt may find suitable. He argued in an op-ed published last week in The New York Times that while tech companies must work to monitor and handle offending content, governments must also step in.

“Without this type of leadership from government, from citizens, from tech companies, the Internet could become a vehicle for further disaggregation of poorly built societies, and the empowerment of the wrong people, and the wrong voices,” he wrote.

The DHS is still evaluating how to analyze the massive amounts of social media data it would need to crunch, according to the Journal. Regardless, the news outlet’s sources claim that at least for now, the DHS believes its new policy is a step in the right direction.

Critics, however, aren’t so sure the new policy will actually work.

“It seems likely to waste significant resources in terms of money and time without any evidence that it works or any standards to help maximize its chance of being applied fairly and effectively,” Cate argues. 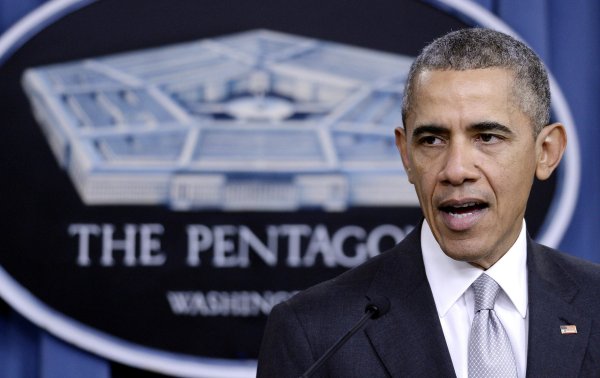 Obama Says U.S. Hitting ISIS 'Harder Than Ever'
Next Up: Editor's Pick