The fifth Republican debate got off to a contentious start when the first question pitted Donald Trump and Jeb Bush against each other on Trump’s incendiary proposal to ban all Muslims from entering the United States.

Trump defended his proposal, saying, “We’re not talking about religion, we’re talking about security” and “our country is out of control.” He referred to migrants fleeing Syria as “tens of thousands of people with cell phones with ISIS flags on them.”

Bush was then asked about his previous comments calling Trump “unhinged” on Twitter. Bush outlined his plan to defeat ISIS and said, “Donald is great at the one-liners, but he’s a chaos candidate, and he’d be a chaos president, he would not be the Commander-in-Chief we need to keep our country safe.”

Trump was quick to lash out at Bush. “He said that very simply because he’s failed in his campaign, it’s been a total disaster and nobody cares,” Trump said.

But Bush continued: “Banning all Muslims will make it harder for us to do exactly what we need to do, which is destroy ISIS… We need to engage with the Arab world to make this happen.” 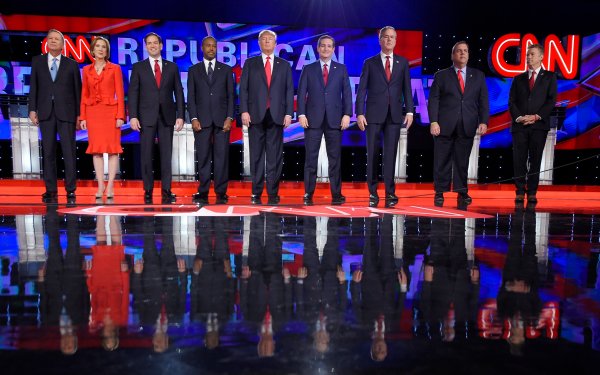 Read the Full Text of the Dec. 15 Republican Debate in Las Vegas
Next Up: Editor's Pick