Hillary Clinton speaks about her counterterrorism strategy at the University of Minnesota in Minneapolis on Dec. 15, 2015.
Charlie Neibergall—AP
By Sam Frizell

Laying out her plan to prevent a terrorist attack on American soil, Hillary Clinton on Thursday called for an “intelligence surge” against terror recruits, including increased surveillance of suspects and greater oversight of social media.

The former Secretary of State’s plan would aim to tamp down on ISIS recruitment in the United States and halt the flow of fighters into and out of the country. Her proposals come two weeks after the deadly attacks in San Bernardino, California, where 14 people were killed.

Since the attacks, Republican candidates have intensified their call for an aggressive confrontation with ISIS, and GOP frontrunner Donald Trump has said he would bar all Muslims from entering the United States. Clinton criticized the Republican response in her speech and touted her own proposals.

“Throughout our history, we’ve stared into the face of evil and refused to blink,” Clinton said, speaking in Minneapolis in the late afternoon. “No one should ever underestimate the determination of the American people. And I am confident we will once again choose resolve over fear.”

Clinton said she would ask technology companies in Silicon Valley to expand their oversight of posts that could be used to radicalize recruits. Tech companies, she said, should enforce strong service agreements and track questionable content.

“We have to stop jihadists from radicalizing new recruits in person and through social media chat rooms, and what’s called the dark web,” Clinton said.

The Democratic Presidential candidate also called for more U.S. federal operations officers and linguists, as well as increased technical surveillance. Clinton said that the United States should increase its intelligence sharing with its European allies, and amp up visa investigations for anyone who has traveled to a country with a terrorist presence.

The United States “needs to know identifies of every fighter that makes that trip” to war-torn regions in the Middle East, she said, emphasizing that the U.S. should increase monitoring of social media, where much of the recruitment occurs.

Clinton last month in New York laid out a plan for countering ISIS in the Middle East, calling for an intensification of President Obama’s current policy to denigrate ISIS and additional measures, including a no-fly zone over Syria and increased flexibility for U.S. special forces.

She repeated her call on Thursday for the destruction of ISIS. “It is not enough to contain ISIS,” Clinton said. “We must defeat ISIS, break its momentum and then its back.”

Clinton is traditionally seen as more hawkish than many Democrats on both her Middle East policy and surveillance. She voted in favor of the USA Patriot Act, which ultimately enabled bulk data collection of Americans’ phone records, but said this year she supports the USA Freedom Act, which effectively ended the NSA’s bulk collection of data.

Before her speech, Clinton met with a group of local Muslim community leaders in Minneapolis, according to an aide for the campaign. 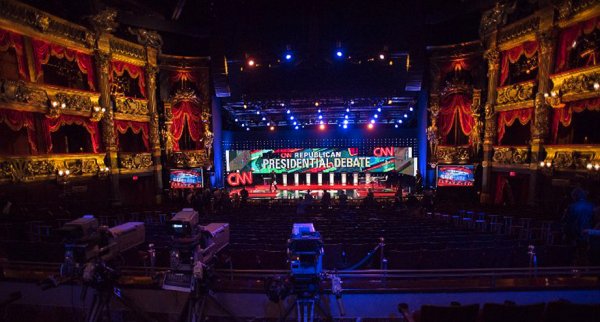 Here Are All of the 2015 Presidential Debate Stages
Next Up: Editor's Pick