I love Christmas: singing carols, eating cookies, giving gifts, watching the excited children—OK, maybe just my excited children. The others can be a little much, particularly when we’re all standing around in a crowded, claustrophobic line at a mall waiting for a chance with the man of the hour, as we were a few years ago, when my daughters were 4.

“Mommy, is it time yet? Is it my turn? Mommy. Mommy. Moooooooooooom.”

The little girl in line in front of us must have been about 5. The urgency of her tone increased along with its volume as her mother continued to try to distract her baby brother with an iPhone and some keys. It didn’t reach slam-yourself-on-the-floor-and-scream tantrum level, just a persistent, niggling squeak-like sound. I plastered on my best we’ve-all-been-there face and tried not to let my eyes show the horror I was feeling at being trapped square in the middle of a line that snaked back and forth along red, fake-velvet ropes set up on rickety plastic poles just for this occasion.

A few moments later, the child behind us pushed his brother into my children, and the whole line nearly toppled down like Dominoes. I prevented a possible holiday trip to the emergency room by stopping their fall with my arm. I didn’t look back at the other mom—it would only pile upon her embarrassment. Instead I worked on keeping my twins calm and collected. They were tired, they were hungry, and they were bored. We’d been standing in line for almost an hour. I had never felt less jolly in my life.

That is, until about 10 minutes later when both my kids decided they were too hot in their winter coats indoors and unceremoniously saddled me with the puffy, bright green baggage. Joy.

By the time we were herded into the main waiting section, with a glittering archway alight with twinkling Christmas bulbs just within our grasp, I was a sweating, bumbling mess who could barely reach into my overstuffed purse to find my cell phone or wallet. Just three kids left before us.

When the magical moment arrived, and my little ones were finally perched upon St. Nick’s knees, they froze. I was asked to “leave the set” so the photographers could do their jobs, but my girls suddenly didn’t fancy being 20 feet away from their mother on a stranger’s lap. I saw the emergency face—you know, the one where the lip quivers and the eyes widen, the one that happens 0.03 seconds before the loudest wail anyone has every heard.

Springing into action, I tripped over the winter wear I was carrying and accidentally dropped my phone, which I had been planning to use to grab some free, uncentered, amateur pictures. I made it to the girls before they howled—a Christmas miracle. I ended up dropping all our stuff in a pile at my feet and standing right in front of Santa, petting my girls’ hair and coaxing them along. “Didn’t you say you wanted an Easy Bake Oven for Christmas?” I pleaded quietly, knowing the impatience of the crowd behind me was growing.

If we had gotten a Santa Claus photo that year, it would have starred my back, completely obliterating Santa from view, and two slightly terrified little girls, seated unwillingly on some floating legs. Given the circumstances, I wasn’t pressured by the staff to buy anything. I know from past experiences that after the snap and the flash, you’re presented with multitudes of options and packages for purchase, so that you can forever remember the joyful experience you just had.

Many mall Santa shots can cost anywhere from $15 to $99, depending on the package and the location. Some offer digital prints; some the traditional wallets. Some offer the one 5×7 pose; some a CD of different poses. After that year, I’ll never understand shelling out money for the experience of smelling everyone’s Christmas cheer up close and personal for two hours and watching their children cry.

But money is part of the experience. It may be against Winter Wonderland regulations to explicitly talk cash, but everyone working to pull off this magical event—from the security guards to the photographers to Santa and his Elves—are doing so to help make their living.

Mall Santas have a long and storied history in the North America. There are Santa Schools available to train them, and a talented Santa can pull in $20,000 per holiday season, according to The Bureau of Labor Statistics. A survey by Insure.com estimates that were Santa a real worker, he’d make upward of $140,000 a year when toy-making, wrapping, networking events and travel are taken into account. While many Santas are a one-man show, booking their gigs by themselves, many others are employed by companies that help them find placement at malls across the country. The Bureau of Labor Statistics estimates that each Santa sees upwards of 150 children per 10-hour shift.

Of course, Mall Santa will probably never see mine again. Since our holly jolly wait of misery, we’ve opted for other Santa options. Town organizations often have their own Santas, or companies rent them for employees, and these experiences are usually free. But I’d really rather avoid the whole thing altogether. At 7, my kids can write their own lists, check them twice and stick them in the mailbox themselves. That way their wishes reach Santa in the North Pole, which is where holly jolly really belongs anyway. 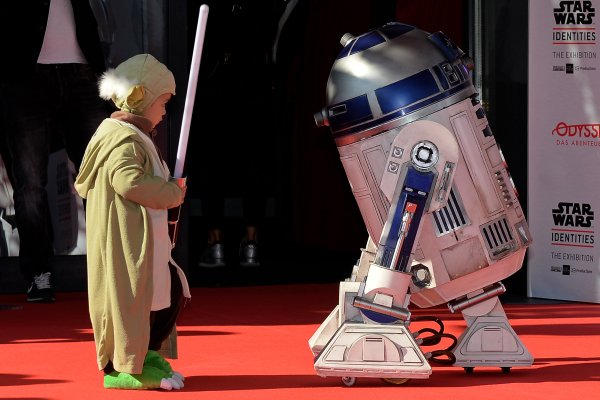 Should You Take Your Kid to See Star Wars?
Next Up: Editor's Pick