Paul Ryan Also Has a 'Road Map' to Governing

House Speaker Paul Ryan took time out from visiting his wife’s family in Oklahoma over the holidays to chat with TIME about his speakership. Below is a transcript edited for length and flow looking ahead to what 2016—and 2017—might hold for him and his members.

Q How do you envision uniting your party, specifically the Freedom Caucus?
A. One of the ways in which I wanted to see if I could be successful at this job was to see if we could unite before the speaker election. We did and I think we all have a very good understanding of each other on what a successful speakership looks like and we don’t want to have a situation where we’re sabotaging ourselves in the middle of a session.

Q. How long will you be Speaker?
A. I don’t know the answer to that. I clearly didn’t envision doing it in the first place. I know I’ll be speaker until the end of the session. Beyond this session, it just isn’t something that I envisioned so I haven’t given a great deal of thought about that.

Q. Former Speaker Boehner told me that he thought that by accepting the job, you accepted that you wouldn’t be able to run for president. Is that true?
A. I think the fact that I didn’t run this year tells you that it wasn’t something that I had a burning ambition to do. I have a burning policy ambition, I don’t have a burning political ambition but as far as what this job leads to or doesn’t lead to, if my goal is to become president the United States, I probably wouldn’t have done this.

Q. What do you make of Donald Trump’s candidacy?
A. I have a policy of not commenting on these things. I’m not going to weigh in on the presidential elections or handicap or judge the various candidates. I will provide policies, but I’m not going to judge candidates. I’m a neutral observer in this election. So the last thing I want to do is get in to a tit for tat with the various presumptive nominees.

Q. How do you think you’ll be different as a speaker? Do you think you’ll govern or manage differently?
A. I come to the job as a committee chair, not a leadership person. So it’s not power that I’m looking for, it’s not a consolidation of power that I want. I look at this job from a different perspective from a sort of rank and file policy maker’s perspective, point one. Point two, I don’t want a situation where leadership predetermines the outcome of everything that Congress does and I think that’s one of the mistakes that have been made in the past where leadership tries to control Congress on a daily basis in predetermining outcomes on everything. I don’t think that’s the way the system was designed to be run and I do believe that Congress would work its will more freely. That means that some bills may come up that just do not pass and I don’t think that’s a reflection on leadership failure I think that’s letting Congress do its will and opening up the system and letting the members drive the process. So I believe in a more organic bottom-up, committee-driven member driven system.

Q. What legislation do you envision passing?
A. My goal is to make us the party of ideas and to offer the country an alternative plan, innovation and agenda so that the people in this country in 2016 can realize where they’d want to take the country. … We should show people what our ideas look like in practice so that if we are given the opportunity to lead in 2017 by having Congress and the White House what it is we would do with the responsibility that would have been given to us by the people of this country. That to me is what we have to offer and that’s economic policy, that’s upward mobility, that’s fighting poverty, leading people from welfare to work, balancing the budget, paying off the debt, fixing health care and the entitlements and the tax code, rebuilding the military, the whole laundry list of things.

Q. What about tax reform in 2016?
A. Well, I do think that we can probably pursue some limited tax reform on international. I do think that’s been something I’ve been trying to do and something that I believe in advancing. So we’re going to continue working on that but I don’t think that comprehensive tax reform is in the cards with this president.

Q. Do you see an Obamacare replacement in 2016?
A. You’re seeing a massive consolidation of the health care industry denying people choices. It’s a new wave of crony capitalism where business and government are joining together and I do think consumers are getting the short end of the stick, I think families are struggling. You’re seeing less choices and higher premiums and I think that we have an obligation to show the country what a real replacement looks like and that is among the agenda items that I believe we have to roll out this coming year. What form it takes shape, whether it’s a bill that passes the House or not, I don’t think that’s as important as laying the agenda out there, showing what it looks like so if we are given the responsibility to lead in 2017 we have the obligation and the authority to put this agenda into practice.

Q. I remember you once told me that you looked at the Road Map as the first offer in a long negotiation, is this your first offer on all policy?
A. I believe it’s our responsibility to show the country: here’s what we would do if you’d trust us to lead, here’s what it would look like. So I don’t think that’s negotiating, I think that’s offering an alternative and if you win then having the obligation to put that alternative into place.

Q. But you’d still have to get those bills through a Senate, likely without a filibuster proof majority, and signed into law by a potential Democratic president?
A. The premise of your question is based on who’s in office. If we win the election in 2016 with a Republican president and we have a Republican House and Senate and we just ran on: here’s what we’ll do if we get elected then we’ll have the moral authority and the obligation and the mandate to put it in place. So I don’t see it as an opening round of negotiations, I see if as offering the country a clear choice.

Q. But there’s like zero chance that you’ll get a filibuster-proof Senate majority?
A. We’re not at that stage yet. First of all we have to offer an agenda and then win and election. Then we’ll see. 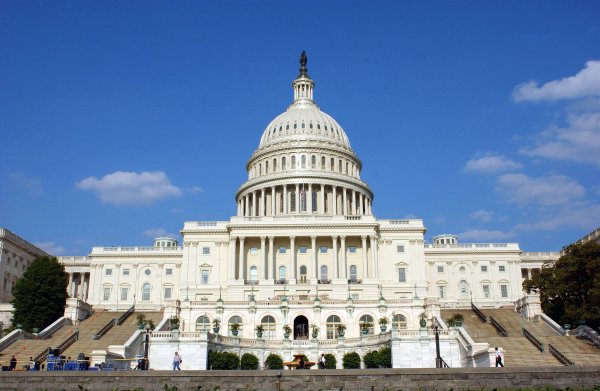