Review: The Force Awakens Is Everything You Could Hope for in a Star Wars Movie—and Less

When you’ve been charged with reviving one of the most obsessively beloved franchises in modern movies, is it better to defy expectations or to meet them? With Star Wars: The Force Awakens, J.J. Abrams splits the difference, and the movie suffers—in the end, it’s perfectly adequate, hitting every beat. But why settle for adequacy? For the first 40 minutes or so, The Force Awakens feels like something special and fresh: For one thing, Abrams and his team of designers and technicians introduce a new star, a droid named BB-8. A roly-poly cueball with a surprisingly expressive half-dome for a head—and a vocabulary of squeaks and squiggles that are more eloquent than mere words—BB-8 is both modernist and old-fashioned at once, a marvelous creation that could have sprung from the imagination of Jules Verne. And Abrams introduces a note of glorious melancholy in the character of Rey (newcomer Daisy Ridley, charismatic in a no-nonsense way), a teenage scavenger marooned on a sandy planet, longing to find her way back to the family from whom she’s been separated. Rey’s loneliness and her self-sufficiency are intertwined. Early in the movie, when she befriends BB-8 (another orphan of sorts), it’s a meeting of kindred spirits. At that point, Abrams makes us believe anything could happen—it’s the best kind of movie feeling.

But somewhere along the way, Abrams begins delivering everything we expect, as opposed to those nebulous wonders we didn’t know we wanted. He’s taken care to do certain things right: The plot is relatively unencumbered by complicated mythology. Anyone coming to the Star Wars universe cold will be able to follow the story—the script was written by Abrams, Lawrence Kasdan and Michael Arndt (based on characters created by George Lucas), and they’re more interested in clarity than exclusivity. The story takes place 30 years after Star Wars Episode VI: Return of the Jedi. The fascist First Order has risen from the remains of the old Empire. Darth Vader disciple Kylo Ren (Adam Driver) is one of the chief baddies, answering to Supreme Leader Snoke (Andy Serkis), a giant, scary, noseless dude who sits placidly in an oversized chair like a dark-lord version of the Lincoln Monument. The First Order hopes to destroy…everything. Luckily, the Resistance is ready to fight back: Princess Leia (Carrie Fisher) is now a general; her brother, Luke Skywalker (Mark Hamill), the last Jedi and a key player in the struggle, has gone missing, and she’s desperate to find him. The new characters folded into the mix include Finn (John Boyega), a renegade Stormtrooper who becomes an accidental hero, and stalwart Resistance fighter pilot Poe Dameron (Oscar Isaac). But the wry, grizzled soul of the movie is Han Solo (Harrison Ford), who returns with his furry sidekick Chewbacca. Chewbacca hasn’t aged a bit; Han, on the other hand, looks like he’s been ’round the galaxy a few hundred times, but damned if he doesn’t wear it well.

For a while, watching The Force Awakens, it’s enjoyable enough to sink into the film’s relatively low-tech production design. Everything looks a little dusty and dirty, including BB-8, whose white-and-orange chassis is so smudged you could almost write “wash me” on its surface with your finger—it’s a marvelous touch. And the reappearance of Han Solo’s freighter ship, the Millennium Falcon, is majestic to behold: It has the look of a classic automobile that’s fallen on hard times, slightly rusty and with a fender or a piece of chrome missing here or there, but somehow keeping all its dignity intact. Abrams also introduces a delightful minor character, wise old barkeep Maz Kanata (voiced by Lupita Nyong’o)—she’s a CGI creation who looks like the love child of E.T. and Lena Horne.

And yet The Force Awakens adds up to something less than the sum of its parts. The early scenes have a relaxed, assured pace. But as the story moves forward, Abrams becomes more mired in the task of keeping the plot mechanics in gear. There’s the expected climactic battle between X-wing starfighters and TIE fighters, which is mildly exciting and nothing more—the fact that it’s punctuated with dumb dialogue like “General! Their shields are down!” “Prepare to fire!” and even the classic, “It would take a miracle to save us now,” surely doesn’t help. And the movie’s big twist, clearly intended to be a moment of Shakespearean grandeur, is handled clumsily: Instead of allowing a significant figure to have his grand moment, Abrams cuts to other characters expressing shock and dismay, as if he didn’t trust the audience to know what to feel.

The Force Awakens is hardly a failure. It has its share of charm, like the moment when Han and Leia reconnect after years of separation—they’re the classic lovers who can’t stand to be in each other’s presence for more than five minutes, but who miss each other quietly and desperately year in, year out. As Kylo Ren, Driver, kitted out in an all-black man-gown and a helmet whose elongated nose echoes the shape of his real schnozz beneath, is surprisingly menacing. In one of the movie’s finest moments, Ren—unmasked and intense—engages Rey in a major stare-down, an unholy duel between the light side of the Force and the dark. The sexual energy between them is strange and unsettling, like a theremin sonata only they can hear. But mostly, The Force Awakens strives to please instead of surprise. Abrams wants us to walk away happy. He just doesn’t give us much to take home. 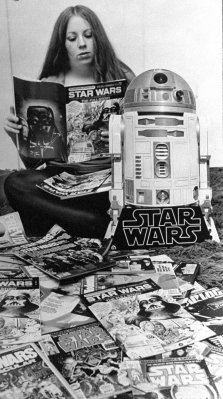