Alan Simpson, former co-chairman of the National Commission on Fiscal Responsibility and Reform, speaks during the Moment Of Truth Project event in Washington, D.C., U.S., on April 19, 2013.
Bloomberg via Getty Images
Ideas
By Alan Simpson
Alan Simpson is a former Republican U.S. Senator from Wyoming.

When the Republican candidates for president step onto the debate stage in Las Vegas Tuesday, there will be many dueling personalities and clashing priorities. But there’s one issue that simply isn’t getting the critical airtime it deserves: the role of money in politics.

I served three terms in the U.S. Senate and was co-chairman of the National Commission on Fiscal Responsibility and Reform in 2010. So I know a bit about how Washington operates, and I have had plenty of experience doing the work of running for office. I also know how much worse it has become in recent years, most notably the constant dialing for dollars to fund campaigns. So when the New York Times reported recently that just 158 families have contributed almost half of all the money raised for the 2016 presidential race, I wasn’t particularly bowled over.

Money’s dominance over politics isn’t merely one problem of many our country faces. It is the problem! It is a growing crisis that prevents us from tackling anything else. And we have now reached a turning point: Either we are a country that makes decisions based on the common good, or one where the size of your wallet determines the validity of your ideas. Either we uphold the values of a representative democracy, or we allow greed and wealth to destroy the world’s greatest experiment in self-governance.

The concept of government of, by and for the people isn’t just a platitude. It’s the moral construction of our nation. It’s in our bones. That our government’s ability to function at the most basic levels is so at risk speaks both to the enormity of this crisis, and the legitimacy of our cause.

I am by no means the only one who thinks this way. According to Gallup, 75% of Americans in 2014 believed the federal government is corrupt. According to a New York Times and CBS News poll in May, 84% think money has too much power in our system. That same poll found 85% of respondents support fundamentally changing or completely rebuilding our current system of financing campaigns. About two-thirds think our politics is dysfunctional, according to a September Washington Post/ABC News poll. And in 2014 the Wall Street Journal found that about 70% of Americans are angry and frustrated because our political system seems to only be working for insiders with money and power.

Such high levels of concern, across all parties and demographics, is astounding in times of such noted polarization. So what can we conclude from all this?

It means that there has been a lack of serious proposals to reform our broken political system throughout all of the past presidential debates. It means we have abdicated our responsibility to the public to keep them informed on the most pressing issues of our time. And it means Republican candidates have a huge opportunity in Las Vegas on Tuesday to answer the calls of voters, by laying out specific plans on how to make sure democracy works for everyone.

Vague indictments of shadowy Washington lobbyists or big-spending outside groups aren’t enough. We need concrete solutions, policies that reduce the power of money, ensure that all citizens feel represented by their government and nail the bad guys responsible for breaking the rules. Without the confidence to know our democracy is functioning properly, we risk more disillusionment, more cynicism and even more public apathy toward the entire system.

Many advocates across the country have called for a constitutional amendment to overturn the disastrous Citizens United decision. And while this grassroots effort is strong and growing, there are many more short-term fixes available that would do just as much to place government back in the hands of all people.

You don’t have to look too far to find working models for reform that are earning overwhelming support from voters. From clean elections that just passed in Maine to anti-coordination regulations in California to shining a light on dark money in Montana, there are plenty of ways that average Americans are beginning to wrest control of their local governments back from special interests and wealthy outsiders.

None of these ideas are controversial anywhere except in the corridors of power in Washington. It’s certainly not a partisan issue, either, because Americans from all political parties are patriots who simply want government to work the way it was designed by our Founders.

If the moderators don’t ask, then the candidates should make their positions clear anyway. This issue is too important to too many Americans to not have expressed policies ready to implement on Jan. 21, 2017.

Republicans are just as hungry as Democrats for reforms that rebalance our democracy back toward Main Street. Their candidates need to listen. The debate stage is one of the best possible ways to highlight these critical solutions to the problem everyone knows we have. Instead of just wringing hands over the corruption and decrying the influence-peddling, it’s time to be patriots not panderers.

Alan Simpson is a former Republican U.S. Senator from Wyoming. He is the co-chairman of the advisory board and member of the ReFormers Caucus at Issue One, a nonprofit organization working to bring new resources, strategic vision and bipartisan leadership to the fight against money in politics. 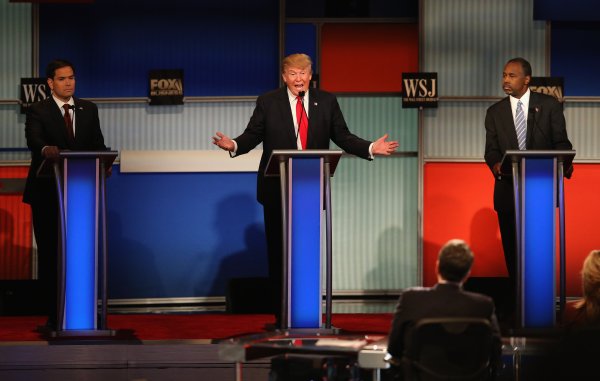 Presidential Debates Are Like High School Cafeterias
Next Up: Editor's Pick