How the Koch Brothers Are Influencing U.S. Colleges

The Koch brothers are supersizing their already hefty investments into college students’ hearts and minds.

A pair of private foundations led by the billionaire industrialists poured more than $23.4 million into U.S. colleges and universities during 2014, according to a Center for Public Integrity analysis of tax documents recently filed with the Internal Revenue Service.

The most notable difference: While some of Soros’ higher education grants go to programs aligning with his domestic policy priorities, the majority are focused overseas, tax records show.

Almost all of the higher education programs the Koch foundations fund cleave to the brothers’ philosophy of promoting free markets and laissez-faire capitalism in the United States.

In some cases, the Koch foundations have attempted, or succeeded, in attaching certain strings to their contributions, such as control over curriculum, and more recently, obtaining personal information about students. Dozens of college officials interviewed this year by the Center for Public Integrity assert that their professors retain full academic freedom and may teach as they see fit, regardless of who is funding their programs.

The vast number of agreements between wealthy donors and the college and universities they fund are never made public, so it’s impossible to comprehensively assess the conditions attached by such benefactors.

George Mason University, a public school in Northern Virginia about 15 miles from Washington, D.C., received almost $16.8 million — the majority of the money Koch foundations last year directed at higher education in 2014, and by far the most of any recipient.

Charles Koch has long maintained close personal and financial ties to the university, which hosts a pair of research centers specializing in free market economics and individual liberty: the Mercatus Center and Institute for Humane Studies.

“Like many charities, the Charles Koch Foundation recognizes the importance of supporting a diversity of ideas so scholars and students can continue to push the frontiers of knowledge and help people discover new and better ways to live fulfilling lives,” Charles Koch Foundation spokesperson Trice Jacobson wrote in a statement. “Our giving has expanded to support new research and programs on critical issues ranging from criminal justice reform to corporate welfare.”

In addition to direct college funding, the Charles Koch Foundation and Fred C. & Mary G. Koch Foundation also provided dozens of educational scholarships and grants — most valued between $2,000 and $4,000 each — to college students, tax records show.

In contrast to the Koch foundations, Soros’ cash typically went to foreign schools, U.S. colleges and universities for use toward international or international-focused programs or to U.S. colleges for no earmarked purpose at all.

The University of Maryland received $200,000 to support programs improving medical and public health systems in Myanmar, while Georgetown University in Washington, D.C., got $100,000 to host Guatemala’s former attorney general as a visiting scholar at the school’s Institute for Women, Peace and Security.

Some of Soros’ domestic contributions are, however, directed at interests here at home.

There are those that are decidedly noncontroversial, like the $100,000 Soros’ Open Society Institute gave Wesleyan University in Connecticut to fund military veteran scholarships.

But some contributions closely align with Soros’ domestic political and policy leanings, such as campaign finance regulation.

Soros’ Foundation to Promote Open Society directed $400,000 at Fordham University in New York City to conduct “field experiments on the role of money in the Democratic process.” The Ohio State University received $50,000 for a similar purpose — conducting research to “better understand the role that independent expenditures play in contemporary federal election campaigns.”

The Soros-backed foundations, which collectively operate as the Open Society Foundations, “put our money where our values are — promote human rights, strengthen the rule of law, make political and legal systems fairer—to meet our priorities the world over, including in the United States,” spokesman Jonathan Kaplan said in a statement.

“We constantly examine and fine-tune our grantmaking as situations and needs change,” he added. “We do not compete with or judge what other philanthropies do with their resources.”

Soros remains one of the nation’s most significant and reliable liberal political donors, having this year personally contributed $1 million to Priorities USA Action, a super PAC that is supporting Democratic presidential candidate, and another $1 million to American Bridge 21st Century, a super PAC that advocates against Republicans.

The Koch network, by Charles Koch’s own estimate, plans to spend about $750 million during the 2016 election cycle.

Read More: Here’s Where Republicans (And Some Democrats) Won

Despite controversy, full speed ahead

The Charles Koch Foundation, the main Koch-led foundation to support higher education, ended 2014 with $527.7 million in its account, according to federal tax records.

There are a few schools, however, that are no longer interested in getting a piece of that money.

The University of Dayton in Ohio confirmed to the Center for Public Integrity that it is no longer accepting Koch-connected money.

These developments should “make other schools take pause and move them to be more transparent” about their relationships with Koch-led foundations, said Kalin Jordan, a student at Suffolk University who helps lead the anti-Koch activist group UnKoch My Campus.

They did at Western Carolina University in North Carolina, where numerous faculty members fought against the school creating a center for free enterprise that’s slated to receive Charles Koch Foundation support. Nevertheless, the school’s board of trustees this month approved the center.

But the Charles Koch Foundation did indicate on its 2014 tax filing that it had already committed to divide more than $4 million among 11 schools, booking those payments in 2015.

A copy of a grant agreement obtained by the Center for Public Integrity also indicates that the Charles Koch Foundation on April 13 agreed to pay Utah State University up to $1.54 million over three years to support the Institute of Political Economy in the university’s Jon M. Huntsman School of Business. 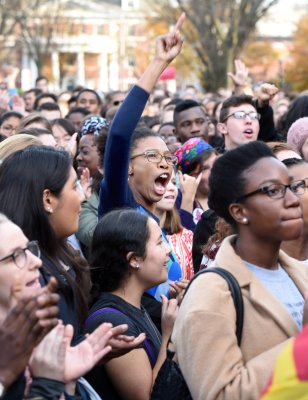 Yale's Top Dean On Campus Protests
Next Up: Editor's Pick