Texas Plumber Sues After Spotting His Truck on a Syrian Battlefield

A Texas plumber is taking legal action against a car dealership he claims is responsible for a truck he once owned ending up in the possession of Syrian extremists.

Mark Oberholtzer is seeking $1 million in damages against AutoNation Ford Gulf Freeway, where he says an employee stopped him from removing his plumbing company’s logo before he sold them his Ford F250 in October 2013. The car was later sold at an auction and was eventually shipped to Turkey. From there, according to the suit, it ended up in Syria.

Oberholtzer says he was assured the logo would be completely removed before it was sold, but he found out in December 2014 that no such removal took place. The truck with the logo for Mark-1 Plumbing was still intact, including a telephone number, when it appeared in extremist propaganda. An image of the truck was later broadcast on the Colbert Report.

Oberholtzer claims he was harassed and threatened with death and violence as a result of the dealership’s alleged mistake. “By the end of the day, Mark-1’s office, Mark-1’s business phone, and Mark’s personal cell phone had received over 1,000 phone calls from around the nation,” the lawsuit says. 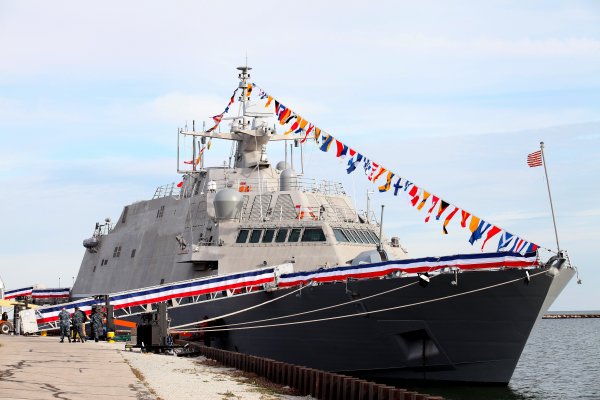 $360 Million Navy Ship Breaks Down After Less Than a Month at Sea
Next Up: Editor's Pick