Here's Why the East Coast Has Been So Warm

Next week marks the start of winter, but you wouldn’t know it by looking at the East Coast. Weather centers east of the Rocky Mountains have continued to track ongoing daily record high temperatures.

“You’re not eclipsing these records by a degree or two as you normally break records,” said Sean Sublette, a meteorologist at Climate Central. “These are very large breaks in the records.”

Meteorologists attribute the warm weather to two strong concurrent climate phenomena: the Arctic Oscillation trapping cold air in the North and an exceptionally strong occurrence of El Niño. Either one of these patterns would warm temperatures on its own. Together, they make for an especially warm winter.

The Arctic Oscillation is a stream of winds that runs above Alaska, Canada and other places in the Northern Hemisphere. A strong Arctic Oscillation traps cold air in the Arctic region while cold Arctic air seeps down into the U.S. and Southern Canada during periods with a weak oscillation. This happened the two previous winters when the so-called Polar Vortex left huge swathes of the U.S. to experience bone-chilling record low temperatures.

“[Strong Arctic Oscillation] tends to keep a lot of the cold bitter Arctic air locked up toward the Arctic, where you think it’s going to be anyway,” said Sublette.

El Niño, a climate event that occurs when Pacific Ocean temperatures rise along the Equator, drives up temperatures across the globe. That temperature effect is particularly strong in the Northern part of the United States as El Niño-related winds push warm air in from the Pacific.

“When you combine an Arctic Oscillation along with a strong El Niño. this is what you end up with,” said Mike Halpert of the Climate Prediction Center.

Forecasts suggest that the East Coast will experience a bit of reprieve from the warm weather this coming weekend as temperatures dip below 40°F. But overall the winter will likely be far warmer than last year, when winter temperatures dipped to near record lows and stayed there for the season. And, if you live on the East Coast, you can forget about a White Christmas if you live anywhere South of Boston, said Sublette.

Areas west of the Rocky Mountains are experiencing similarly strange winter weather. The region has been drenched with rain El Niño-related rain that meteorologists expect to continue well into 2016.

The warm weather comes after a year of high temperatures, at least in part due to El Niño. Global temperatures records were shattered month after month this year and climatologists agree 2015 will be the hottest on record. Next year will likely be even hotter. 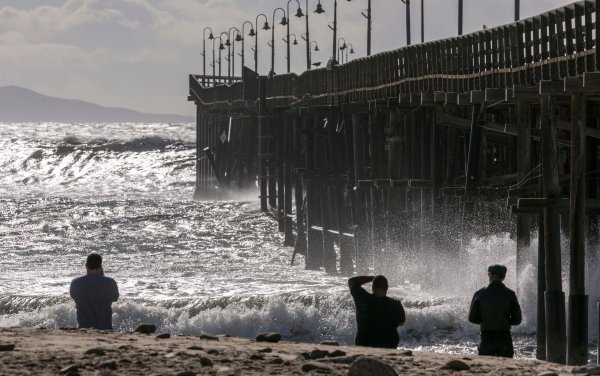