A video shows Los Angeles County sheriff’s deputies fatally shooting an armed man, continuing to fire after he falls to the ground.

Authorities say they opened fire on the suspect after he ignored “multiple commands” to drop his handgun near a gas station at a busy intersection in Lynwood, Ca. Footage of the fatal shooting shows two deputies repeatedly shooting the man even after he falls and appears to drag his body away from them.

The video sparked protests in the neighborhood, according to reports, as police urged caution in jumping to conclusions about the incident.

“In this modern age of cellphone video and instant analysis on the Internet, I would ask that we keep in mind that a thorough and comprehensive investigation is detailed and time-intensive,” Sheriff Jim McDonnell said in a statement. “It will involve not just one source of information, but numerous sources, potentially including multiple videos, physical evidence and eyewitness accounts.”

The Sheriff’s Department said witnesses saw the man point his gun at deputies before they unleashed a hail of more than a dozen bullets. Officials say they found a loaded .45-caliber handgun at the scene.

The suspect died at the scene from gunshot wounds, authorities said. The Sheriff’s Department did not yet release his name, but relatives identified him as 28-year-old Nicholas Robertson, according to the Los Angeles Times. 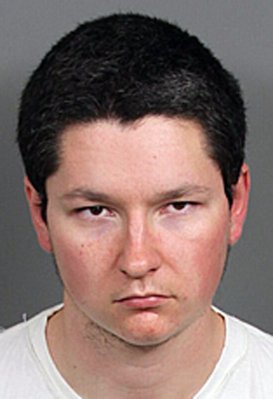 Man Arrested For Mosque Fire Charged With Hate Crime
Next Up: Editor's Pick