Meet the Refugee Who Named Her Baby After Angela Merkel

Hind Almahdawi was exhausted. She was about nine months pregnant and had just arrived in the city of Hanover, Germany, after an 18-day journey over land and sea with her husband and four year-old-son from their hometown of Baghdad, where they had to decided to flee after her husband Ali Adnan, a soldier in the Iraqi military, had received death threats from ISIS.

As the train from near the Austrian border pulled into Hanover on the morning of October 4, she could already feel the pains of childbirth. From there, it was a scramble to find a hospital. That afternoon, she gave birth to a baby girl. Her husband proposed the name Angela, after German Chancellor Angela Merkel, whose generous policy toward refugees is what allowed the family to arrive and settle in the safety of Germany.

It was in part for her refugee policy that Angela Merkel was named TIME’s Person of the Year this week. Although she is under political pressure to reduce the number of asylum seekers arriving in Germany, she has restated her promise to welcome refugees with “open arms.” The birth of baby Angela in October was emblematic of how Merkel’s leadership has inspired the millions of people fleeing war and civil strife across the world.

“She helped many people,” Hind says of Merkel in a phone interview. “My husband suggested it and were both happy with the name.”

Almahdawi, 22, and her husband decided to leave Iraq after he received threats that he says came from ISIS. The message, which he says came in at least one phone call and a written message, was simple and chilling: leave the military and join the jihadists, or you and your son will be killed. “People say Baghdad is safe,” says Andan, who is 35. “But the problem is Baghdad is like a silent bomb.”

The family had other reasons to leave. Their four-year-old son, Mustafa, needed treatment for a heart condition. But it was the death threats that spurred their flight, like so many others in the Middle East, first to Turkey, then to Greece in an overcrowded smuggler’s boat, across the Balkans by bus, then a series of trains through Croatia, Hungary, Austria, and finally Germany. Andan said that at one point in Turkey, the whole family, including four year-old-old son Mustafa and the pregnant Almahdawi, hiked for hours across rugged terrain.

The family found a temporary home in a shelter for refugees in the German town of Sarstedt, outside of Hanover. It was there that photographer Alexander Koerner took a series of portraits of refugees. Koerner set up his equipment in the main hall of the camp, where the residents would come to eat their meals. He sat and talked to each person before taking their portrait, in order to develop a sense of their individual story. “It’s just focused on the person not on the environment itself,” he says of the images. “He can look however he looks.”

As they spoke on Friday the family was preparing to move out of the shelter into housing where they would have their own room, although the exact destination had yet to be determined. Almahdawi and Adnan said they were worried about the relatives they left behind in Iraq, including Almahdawi’s parents and three brothers, but they expressed confidence that their children had better chances for their future in Germany then they could have ever had in Iraq. “I’m happy to be safe with my family,” said Almahdawi. The family’s future is still uncertain, but thanks to Merkel and Germany, they no longer have to live in fear. 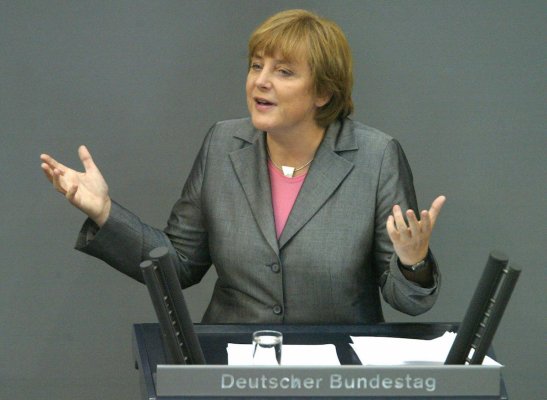