Almost Every Airline Has Banned the Year's Hottest Holiday Gift

A youth poses as he rides a hoverboard, which are also known as self-balancing scooters and balance boards, on October 13, 2015 in Knutsford, England.
Christopher Furlong—Getty Images
By Lisa Eadicicco

If you’re giving or getting a self-balancing scooter, or “hoverboard,” for the holidays this year, don’t count on flying with it. Most major U.S. airlines have banned the devices over safety concerns regarding their electrical systems.

Delta, United Airlines, Alaska Airlines, American Airlines, and JetBlue are among the major air carriers that have decided to ban hoverboards. Southwest, however, will still let you bring one on board.

“It is preferred that personal transport devices are treated as a carry-on item,” reads a statement Southwest sent TIME. However, if a scooter is too large to fit in a carry-on bag, it will have to be packed in checked luggage and protected from “accidental activation,” the airline says. Still, Southwest is taking some precautions. Scooters with batteries larger than 160 watt-hours will not be permitted on the plane; the airline has the same rule for other electronics powered by similar batteries.

The airlines’ hoverboard bans come amid several reports of the devices’ batteries catching fire and exploding, in some cases doing serious damage. The U.S. Consumer Product Safety Commission has received “at least 10” reports of fires caused by hoverboards, according to NBC News. That number, an agency spokesperson told NBC, is “increasing daily.”

The battery issues have been a major headache for the companies that make hoverboards, including IO Hawk and PunkeeDuck, among others. However, executives from those two firms argue their products are safe. Instead, they say, it’s cheap knockoff hoverboards causing all the problems. IO Hawk and PhunkeeDuck’s hoverboards cost between $1,500–$1,800 while models from off-name brands can cost as little as $385.

“Just out of safety precautions, I can understand where the airlines are coming from,” IO Hawk President John Soibatian told TIME. “There isn’t a dollar amount you can put on somebody’s life…Each one of our components is tested before we put it into the marketplace. When we charge $1,800 it’s not for the logo.”

Maxx Yellin, the co-founder of PhunkeeDuck, echoed that sentiment.

“One of the main reasons this is happening is because non-personal transporter factories are trying to manufacture these units as fast and cheaply as possible,” Yellin told TIME in a previous interview. That, Yellin says, “results in shortcuts in production, using weaker motors, unreliable gyroscopes, and batteries, improperly designed motherboards, and most importantly skipping the correct safety testing that is needed with this product.”

Indeed, the hoverboard market is flooded with models of varying quality. And because the devices are still so new, consumers haven’t learned which brands are trustworthy and which are not. Many shoppers are likely to buy cheaper hoverboards simply because they look like a better deal. That’s problematic for the high-end hoverboard companies, as their products get lumped in with the bad press surrounding cheaper gear. 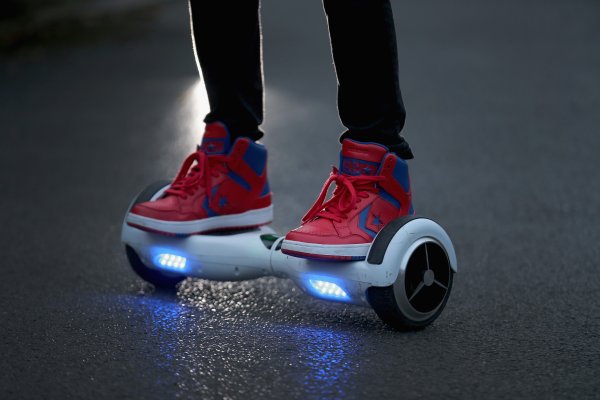 Future 'Hoverboards' Will be Able to Connect to the Internet
Next Up: Editor's Pick