Negotiators gathered in Paris this month to craft what they hope will be the world’s most significant agreement aimed at tackling climate change appear to have made significant progress toward that goal.

A new draft of the agreement released Thursday evening shows new consensus on a long-term cap on temperature rise and a system for countries to revise and improve efforts to reduce their greenhouse gas emissions. Other key issues remain unsettled with the conference expected to continue past its scheduled Friday evening end time, but conference leaders said they will deliver a new text at 9 am on Saturday. Observers expect formal agreement in the following hours the new text.

“The real negotiations have finally begun,” said Jennifer Morgan, global director of the climate program at World Resources Institute. “There are very clear signs of progress, but key provisions are still in play.”

The mention of a 1.5°C target is the result of “small guys moving the big guys,” in the words of Monica Araya, executive director of Nivela, a climate change think tank. Some of the countries most vulnerable to the effects of climate change launched a concerted effort to push their developed counterparts. Many small island developing nations, like Kiribati, risk becoming uninhabitable if temperatures rise above that threshold.

The new draft also shows consensus that countries should reassess their plans to reduce their greenhouse gas emissions as science and technology advances. The new agreement calls for that process to occur every five years beginning in 2019. Many developing countries had been reluctant to agree to a preset review period out of fear they would be forced into emissions reductions that would cripple development.

“This is a bet on innovation, this is a bet on technological change,” said Nathaniel Keohane, vice president of global climate at the Environmental Defense Fund.

Negotiators have also yet to agree on key question regarding how to finance efforts to address climate change in developing countries. Developed countries committed in 2009 to sending $100 billion a year to their developing counterparts. The new draft agreement confirms that promise, but details about what counts and how it is counted remain in the air.

The last minute nature of talks on what has been tentatively dubbed The Paris Agreement are not unusual, and negotiators remain optimistic despite areas of significant disagreement. Negotiators want to be able to show their bosses and citizens in their own countries that they played hardball in negotiations and did not concede too early. Past climate negotiations have seen worse discord at this stage of talks.

The host country, France in this case, plays a key role in determining the structure of any agreement in climate negotiations. French officials assess areas of agreement and consensus and write the draft text of an agreement incorporating areas where countries have reached a consensus. The host leaves areas that remain undetermined in brackets. Brackets can technically be added back to any part of the text, but they rarely return once the host removes them. The latest draft of the agreement contains only 48 brackets, down from more than 300 in the previous version of the text.

“I think, dear friends, that we will get there,” said French Foreign Minister Laurent Fabius before releasing the new draft Thursday. 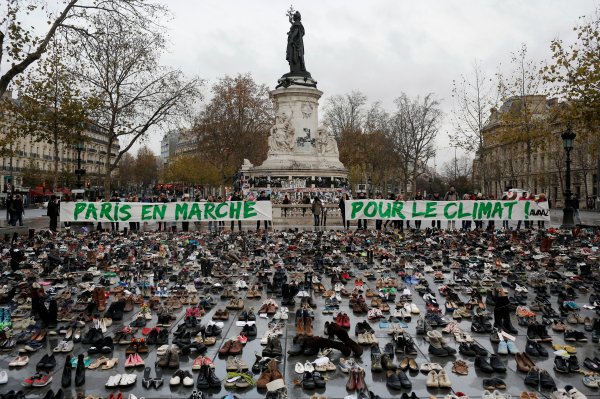