These 5 Facts Explain Why Venezuela Is in Big Trouble—Still

Sunday’s parliamentary elections were a tremendous blow to President Nicolás Maduro, Chávez’s chosen successor. The opposition Democratic Unity Roundtable alliance—a coalition of centrist, center-left and center-right parties, known as MUD for its Spanish-language acronym—won 112 of the 167 seats in the National Assembly. The size of the victory matters—had MUD won just a simple majority (84 seats), it would live in constant fear of having its powers diluted by the country’s strong executive.

But by securing a two-thirds majority, the National Assembly now has the power to remove members from the Supreme Court (which Maduro effectively controls via fiat) and even rewrite the country’s 1999 constitution. And with such a sizeable parliamentary majority, the opposition will likely take steps to call a referendum to remove Maduro from office sometime within the next year. (He currently has a 22 percent approval rating).

(The Guardian, Council on Foreign Relations)

But Venezuela needs a lot more than just a change of political leadership. Let’s start with the economy, which is on course to contract by 10 percent this year. Venezuela must pay back $15.8 billion in debt between now and the end of 2016, but the country only has $15.2 billion in foreign reserves to make good on that. 7.3 percent of Venezuelan households are classified as living in “extreme poverty.” Working for the minimum wage in Venezuela means you can only afford a week’s worth of groceries per month—40 percent of people working in Venezuela make the minimum wage or less.

Come 2016, the country is projected to have an 18.1 percent unemployment rate. Inflation this year has already reached a staggering 159 percent; Venezuelans have taken to using their country’s currency as napkins. The only thing worse than not having the money to buy food and basic goods? Having the money and finding bare shelves in the supermarket. There were over 500 protests over food shortages in the first half of 2015 alone. Venezuela currently imports 70 percent of its consumer goods.

3. A Petro-State in a Cheap Oil Age

Why is dependence on imports a big problem? Because to buy those consumer goods, Venezuela needs to sell oil, and the oil price isn’t what it used to be. Venezuela sits on 298 billion barrels of proven oil reserves, tops in the world (Saudi Arabia is second at 268 billion, Canada third at 173 billion). Oil makes up 96 percent of the country’s export earnings and 25 percent of its GDP.

That was once a strength, but no longer—since June 2014, the price of oil has plummeted from $111 per barrel to around $40, taking with it the Venezuelan economy. Each $1 drop in oil price costs Caracas $700 million in government revenues. Oil has kept the country’s experimentation with Chavismo alive for nearly two decades—between 2005 to 2012, Venezuela averaged annual GDP growth of roughly 5 percent on the back of high oil prices. To balance its budget, Caracas would need the price of oil to jump back up to $125 per barrel. That’s not happening any time soon.

4. Crime and No Punishment

Not having economic security is bad enough; not having actual security is even worse. Only 22 percent of Venezuelans say they “feel safe” in their country, the lowest score in a worldwide study conducted by Gallup. That makes sense, given that 90 percent of crimes in the country go unsolved. Venezuela, a country with a little more than 30 million people, had 24,980 homicides last year, the second-highest rate in the world (Honduras claims the top spot). Between 1998 and 2013, the homicide rate in the country quadrupled. For comparison purposes, the U.S.—a country that’s no stranger to violence—had a little more than 14,000 murders last year with a population of close to 320 million. The US had less than 60% of Venezuela’s murder total with more than ten times as many people.

And let’s not forget kidnappings. The Venezuelan Violence Observatory (OVV), a think tank based in Caracas, estimates that nearly 17,000 kidnappings took place in 2010 (more recent government estimates can’t be trusted). Of those 17,000 people abducted, 50 percent were poor, 47 percent middle-class and fewer than 3 percent were classified as rich. In Venezuela, there’s a decent chance that the person who’s abducting you is better-off economically than you are.

5. A Little Help From My Friends?

When people fall on hard times, they turn to their friends for support. The same is true for countries. But it’s not that simple for Venezuela. Since 2005, cash-strapped Venezuela has borrowed $50 billion from China as part of an oil-for-loans agreement. Venezuela exports more than 600,000 barrels a day to China, but nearly 50 percent of that goes to paying off its existing debt to the Asian giant. Given Venezuela’s current economic problems, the country needs to be selling oil for profit, not for repaying old loans. Add the fact that the world is already facing a glut in oil supply, and it’s clear that Venezuelan oil won’t buy the types of friends it used to.

But Venezuela also finds itself increasingly isolated in Latin America. Cuba is now making overtures to the U.S.. Longtime Chávez ally and Brazilian President Dilma Rousseff is fighting for her political life as her own country’s economy stumbles (the IMF expects Brazil’s GDP to contract 3 percent by the end of 2015). Argentina just elected a new president who has vowed to take Maduro to task for human rights violations; this is in stark contrast to outgoing president Cristina Fernandez de Kirchner, who would send beef and other food staples to Venezuela while its economy was struggling with inflation back in 2008.

None of Venezuela’s struggles are new, and it will take more than a single round of elections to fix them. But given the country’s current economic woes, 2016 is looking like the year when all these problems will finally come to a head. 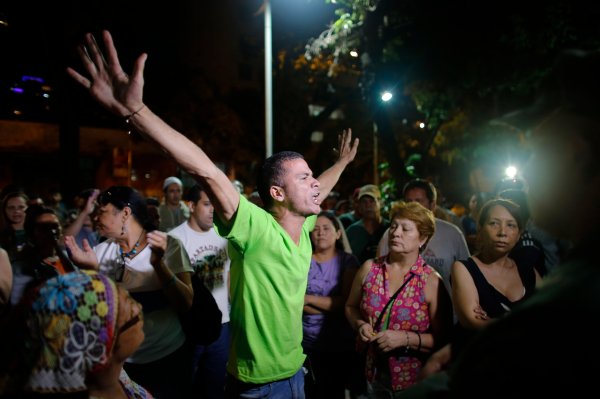 Venezuela Celebrates After the Defeat of 'Chavismo'
Next Up: Editor's Pick