The nominations for the 73rd annual Golden Globes were announced Thursday morning, ushering in awards season. While the Globes, which take place on Jan. 10, 2016, are often looked to as an indicator of who might take home an Oscar come February, they also tend to honor a wider variety of films than the Academy does—so, in the spirit of fist-raising and head-cocking, here are some of the biggest, strangest, and most pleasant surprises:

There were the shocker snubs, the bummer snubs and the make-room-for-comedy snubs: There were a handful of actors whose absence from the list of nominations—especially given that the Globes recognizes 10 lead actors—seemed conspicuous. Chief among them: Charlotte Rampling for 45 Years and Johnny Depp for Black Mass. Others, like the lack of recognition of Kristen Stewart for Clouds of Sils Maria and the young Jacob Tremblay for Room, are less surprising but still disappointing given the strength of the actors’ performances.

On the Best Picture front, Brooklyn, Bridge of Spies and The Hateful Eight were absent from the pack. But the fact that the Globes splits its 10 nominations into one category for drama and another for comedy or musical means that the spots these films will probably snag at the Oscar went to (deserving) comedies like Trainwreck and Spy.

The line between leading and supporting is highly malleable: Perhaps the most interesting choices came not in who got nominated but in which categories they were nominated for. The Hollywood Foreign Press Association seems to be the first awards-giving body to acknowledge that Cate Blanchett and Rooney Mara were co-leads in Carol, throwing a nod to both of them in the Best Actress category rather than recognizing Mara in the Supporting Actress race. It means that—unlike in the scenario in which Blanchett is nominated for lead and Mara for supporting—both can’t win. But it also feels like the nomination Mara deserves.

The same goes for Alicia Vikander, whose name has come up frequently in conversations about the supporting actress race, though her turn opposite Eddie Redmayne in The Danish Girl was arguably as much a leading role as his. Vikander was also the only actor to be nominated for two awards—she also received a nomination for Best Supporting Actress for her very human performance as an android in Ex Machina—suggesting that it’s quite likely we’ll hear her name called on Oscar Sunday, but the movie for which it is called may be a surprise.

Mark Ruffalo was nominated, but not for the expected movie: It’s not altogether surprising to see Mark Ruffalo’s name in the mix, but it is a bit of a curveball that it’s not for Spotlight. Ruffalo was nominated for Best Actor in a Musical or Comedy for his portrayal of a bipolar father in Infinitely Polar Bear, released all the way back in that awards-season wasteland called June. It’s a relief to know that a movie released outside of the expected timeframe can still get love come awards season, even if it comes (arguably) at the cost of a slight to another movie. Which brings us to…

The cast of Spotlight was decidedly shut out of the spotlight: Spotlight got plenty of attention from the HFPA—with nominations for Best Picture (Drama), Best Screenplay and Best Director—but it got exactly zero nominations for its actors, who have been widely recognized as one of the strongest ensembles of the year. Ruffalo, Michael Keaton and Rachel McAdams have made plenty of awards-season shortlists, and it almost seems as though the repeated acknowledgement of the cast might have taken steam away from each of its individual contributors.

Most of the acting nominations were expected, but some were pleasantly surprising. It is a beautiful thing to see Lily Tomlin get her due with a nomination for Best Actress in a Musical or Comedy for her tough-loving, lesbian poet grandmother in Grandma. The same goes for her Grace and Frankie costar Jane Fonda, who makes the most of her limited screen time in Youth as an aging movie star who fails to hide her desperation behind layers of mascara. Al Pacino also snagged a best actor nomination for Danny Collins, an all-but-forgotten dramedy released in March in which he plays an aging rocker who decides to change his hard-living ways.

The Golden Globes’ acknowledgement that comedies and musicals are as worthy of celebration as Serious Dramas also allows for the inclusion of people like Amy Schumer and Melissa McCarthy—for, as Will Ferrell reminded us at the Oscars a few years back, we all know that a comedian at the Oscars is “the saddest [wo]man of all” (if she’s even invited).

Diversity is still a problem. Out of 29 actors nominated for awards, all but two are white. Even as onscreen diversity sees steps forward—as with Viola Davis becoming the first black woman to win an Emmy for best actress in a drama back in September—change sometimes seems to happen not in leaps and bounds but in a slow trickle. In the case of the Golden Globe nominations, it’s not just about who gets a nod, but about who gets what role, and what roles are even available to actors of color in the first place.

Mad Max: Fury Road isn’t going anywhere. Many people were pleasantly surprised to see Mad Max: Fury Road selected as the National Board of Review’s best film of 2015. Though the prevailing sentiment was something along the lines of, “That’s nice, but it won’t be around come Oscar time,” George Miller’s feminist action flick isn’t exactly receding into the distance, either. With Golden Globe nominations for Best Picture (Drama) and Best Director, the movie’s awards-season presence is a reminder that action films can survive the long summer and live to see the glory winter brings. 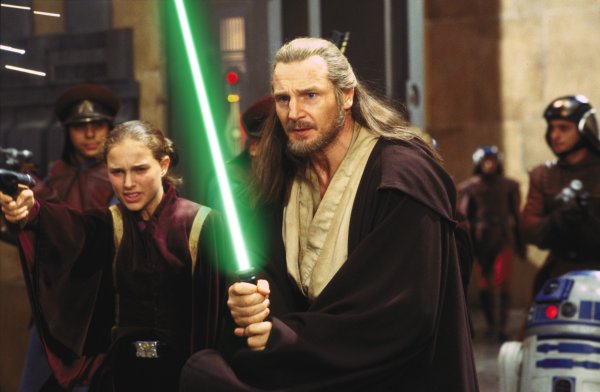 Watch Star Wars Fans React to the Premiere of The Phantom Menace
Next Up: Editor's Pick