In her fourth season, VP turned President Selina Meyer (Julia Louis-Dreyfus) was both a fumbling female Richard Nixon and humanizing proof that any of us could become Nixon, given the right set of allies and adversaries. Veep isn’t just the best show out there; as the presidential race blossoms into reality-TV-inflected absurdity, it’s the most relevant.

There wasn’t much story in Mad Men’s final episodes–the pointlessness of Don’s vision quest was kind of the point. But the last looks at each character provided some tragedy (particularly in January Jones’ performance) and a lot of the unglamorous joy that comes from simply continuing on in a life’s work. The characters go on, even when we’re no longer watching.

Amy Schumer is doing the most explicitly political comedy on TV; the crazy part is that it’s funny. In the third season of her sketch series, she put across sharp ideas about what it means to be a woman–in relationships, at work, in Hollywood–without ever preaching to her audience.

The second season of this anthology series, set in 1979, depicts candidate Ronald Reagan promising to cure a nameless malaise. Good luck to him: here, corruption has taken root at more or less every level of society. No show does a better job of demonstrating how average people (like Jesse Plemons and Kirsten Dunst as naive young marrieds) get sucked into madness.

Star and co-creator Aziz Ansari wears his heart on his sleeve in this new series about contemporary dating. For all its sharp commentary about life as a child of immigrants (as Ansari himself is), Master of None is fundamentally an achingly earnest romantic comedy anchored by a lead performance that’s among the most winning in memory.

Caitlyn Jenner’s gender transition was almost entirely mediated through TV (from Diane Sawyer to Keeping Up With the Kardashians to the ESPY Awards). But her reality show was something else entirely. The series depicts Jenner repeatedly coming face to face with her own deficiencies as a parent and an activist. It was jarring in the best way: an antivanity project.

In its second season, this drama about life after a Rapture-like event pivoted from unwatchably grim to sad and searching. The action has moved to a Texas town where no one departed; goat sacrifices are unremarkable, but humanity is as strange as ever. The central story here is the sort of enigma that makes life painful–and ecstatic too.

This satire of life among Manhattan moms placed its target, usually, on its own protagonist’s idea of herself as better than her fellow socialites. An underheralded gem on a network known for reality shows, it’s the smartest bit of anthropology on TV.

The spectacle on this smash-hit soap opera–chiefly the fierce and deeply controlled performance of Taraji P. Henson (right)–is better executed than anything this side of the Super Bowl. But the show’s Shakespearean notions of filial loyalty and competition add emotion and insight to the shock value.

1 THE LATE SHOW WITH STEPHEN COLBERT

In his third episode doing late-night talk as himself, Colbert defined his new role with a sympathetic but not partisan interview with the Vice President. Politics watchers expected Biden to announce a presidential run; they were surprised when host and guest bonded over shared grief and in so doing pushed the boundaries of what’s possible in late night.

2 THE LAST MAN ON EARTH

The most inventive show on TV, The Last Man on Earth has countless times torn down central parts of its premise in service of something more fun. The exhilarating pilot episode establishes Phil (Will Forte) as a lonely apocalypse survivor before giddily tossing away the concept with the introduction of a new companion (the delightful Kristen Schaal).

After a too-fantastical season, Scandal redoubled its focus on real-world provocation. Olivia (Kerry Washington) invited controversy by going public as the nation’s First Girlfriend. Little on TV in 2015 was as galvanizing as this episode’s look at the coded ways in which powerful black women (like Olivia or show creator Shonda Rhimes) are discussed.

The reboot of this reality standard depicted the year’s most emotionally and politically charged relationship, between a headstrong (white, male) director and an empathic (black, female) producer, working together on a toxic film set. The tensions came to a head in this episode, providing both real insight into who has power in Hollywood and the least contrived look in recent memory at a stressful work relationship.

Episodes of House of Cards tend to blend together into one long binge. Not so the Season 3 finale, which stood out for finally making viewers care about a seemingly pointless subplot–the fate of poor Rachel–and for clarifying what, exactly, the show had been about all along. Claire’s decision to walk out on Frank transformed the show’s meanderings into a path to a grimly satisfying plot twist.

This new drama, about hackers taking on predatory corporate culture, gave us TV’s most sophisticated look yet at the deep web. Delivering the best male performance of the year, Rami Malek (left) stars as a disaffected pirate who already knows he lives in a postapocalyptic world. We’re forced to catch up. 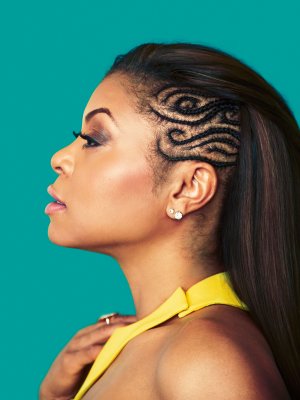 Taraji P. Henson on Hollywood's Racial Biases: 'I Know the Struggle'
Next Up: Editor's Pick