Feeling of Optimism at Paris Climate Talks Despite Disagreement

Francois Hollande delivers a speech during a decorations awarding ceremony to personalities committed to the fight against global warming, on Dec. 9, 2015 at the Elysee palace in Paris.
Stephane de Sakutin—AFP/Getty Images
By Justin Worland / Paris

Negotiations have come down to the wire in Paris with less than 48 hours remaining before talks aimed at producing history’s strongest agreement to address climate change are scheduled to end. But despite large differences on several key issues, a mood of optimism pervades the negotiating halls.

The sense of hopefulness at this stage of discussions marks a stark departure from dour conditions during previous major international climate change negotiations, known formally as Conferences of the Parties (COP), where negotiators grew frustrated and pointed fingers as disagreements persisted in the final hours. COP veterans attribute the difference in mood to the newfound urgency of the crisis, the talks’ new structure, and a spirit of unity inspired by French leadership at the conference.

“However the details come out in a deal, behind it is a sense that most serious countries see this as something new,” said Climate Group CEO Mark Kenber, who has attended 17 previous COPs. “I don’t want to call victory yet, but it just feels qualitatively different than in the past.”

Leaders of the host country play an important role in guiding COPs and Danish leaders have been criticized for running a poorly organized and dysfunctional conference in Copenhagen six years ago. Those negotiations, which had been billed as an opportunity for a strong global agreement, ended in a weak text that left few nations happy. And while many factors affected that disappointing outcome, including a faltering global economy, dysfunction on the part of the Danish government contributed to the problem.

This time around French leaders, including President Francois Hollande and Foreign Minister Laurent Fabius have crafted a well-oiled machine with negotiations running on schedule and with few hiccups. The timing of the conference just weeks after terrorist attacks in Paris left 130 dead has also inspired a sense of unity, observers say. No country’s negotiator wants to be the one to disrupt an agreement when the time comes to reach a deal by consensus, meaning any individual country can halt a deal with just one objection.

A bottom-up process in which countries completed much of their work before the conference began in earnest has also helped negotiations run smoothly. More than 180 nations submitted plans explaining how they would address climate change in their own countries in the lead up to Paris, only leaving negotiators to deal with the broader framework once they arrived. In the past, negotiators have structured agreements in a top-down form that led many countries to object to their proposed obligations.

Read More: Why The Push for a More Ambitious Paris Agreement Is Gaining Traction

Perhaps most important to the spirit of collaboration has been the urgency of climate change for many of the countries involved. Leaders of small island states, some of which could disappear entirely in the coming decades without immediate action, reportedly delivered personal pleas to their counterparts from developed countries. Those pleas have contributed to a move for more aggressive goals by more than 100 nations that joined together to form a “high ambition” coalition.

“There are countries, we know, for which climate change is an existential threat today,” said U.S. Secretary of State John Kerry in an address in Paris Wednesday. “For them, this isn’t a matter of annexes or peak years, it’s a matter of life and death.”

But beneath the optimism there are still areas of serious disagreement. Most significantly, negotiators from developing countries want to see strong assurances that developed nations will honor a commitment made in 2009 to deploy $100 billion in capital annually to aid initiatives in the developed world aimed at addressing climate change. Developed countries say they do plan to follow through with that commitment but the two groups have yet to agree on the details of how it would work.

The U.S. and some partners have also demanded strong accountability measures to ensure that developing countries follow through on whatever commitments they made in the lead up to talks in Paris. And while developing countries have agreed in principle, the details remains sketchy.

But, even on these tricker matters, observers say negotiators seem more willing to compromise than in the past. “There are certainly issues that are sticking points, but we haven’t seen yet that souring,” said Rachel Cleetus, lead economist and climate policy manager at the Union of Concerned Scientists.

Shri Prakash Javadekar, India’s environment minister, told TIME that his country’s negotiating position has “no red lines,” even as it differs with the U.S. and Europe on several key issues. “I don’t see anything as a sticking point,” he said in an interview. “There are things evolving, there are different views, but always different views can be converged and their can be a solution.” 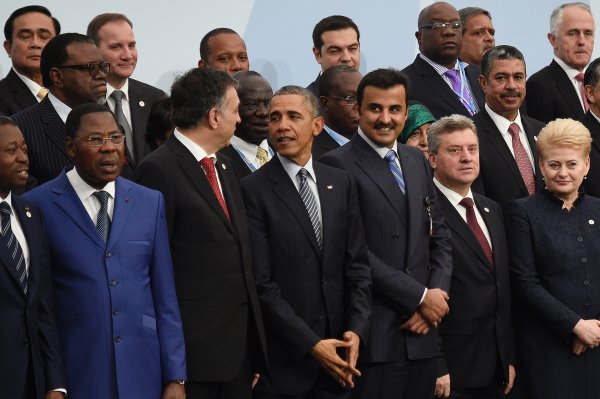 World Leaders Give Climate Conference Momentum
Next Up: Editor's Pick